Scientifically Proven: Luteolin Is The Most Potent Bone-Protecting Anti-Inflammatory Polyphenol. (And It Also Enhances Memory!) - Save Our Bones

Scientifically Proven: Luteolin Is The Most Potent Bone-Protecting Anti-Inflammatory Polyphenol. (And It Also Enhances Memory!) 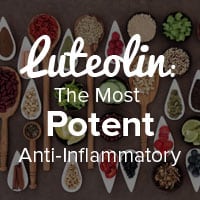 You’re surely aware that inflammation is implicated in many health problems, including heart disease, cancer, and auto-immune disorders. Inflammation plays a role in osteoporosis, too, which is why fruits and vegetables rich in anti-inflammatory antioxidant compounds are emphasized in the Osteoporosis Reversal Program.

While all antioxidants help stave off inflammation and boost bone health, there’s a polyphenol called luteolin that’s especially powerful. Today you’ll learn all about its various biological functions (including the reversal of age-related memory problems), the foods that contain it, and the science that proves its amazing potency.

But first, let’s briefly review why anti-inflammatory antioxidants are so important in the fight against osteoporosis.

Not surprisingly, the Medical Establishment largely ignores the role of antioxidants and inflammation in bone health. Even though research clearly shows that inflammation increases fracture risk, there just isn’t room for nutritional approaches to osteoporosis in a prescription drug-driven world.

So if your doctor hasn’t mentioned antioxidants, it’s simply because mainstream doctors aren’t trained with regard to nutrition and how it relates to bone health.

But the fact is, antioxidants are very closely connected to bone density, which is why they are referred to in the Osteoporosis Reversal Program as your “undercover bone builders.” Antioxidants include polyphenols, plant-based chemicals that have actually been shown to directly influence bone growth by increasing osteoblast production.

The polyphenol we’re going to discuss today is luteolin, whose bone-rejuvenating characteristics are due in large part to its highly potent anti-inflammatory properties. Additionally, exciting new research shows that luteolin enhances and protects memory as we age.

Luteolin: Scientifically Proven To Be The Most Potent Anti-Inflammatory Polyphenol

Research has confirmed one way plant compounds fight inflammation. Your body produces an enzyme called TBK1, which triggers a genetic, biochemical process that leads to inflammation. If TBK1 is held in check, it prevents this process from leading to inflammation.

Polyphenols are able to inhibit TBK1, and when scientists tested which plant chemicals did this the best, the discovered that luteolin beat them all. Its ability to target and block TBK1 was superior to the six polyphenols included in the study.1

Another study shows that luteolin attacks inflammation from another biological angle. A 2012 study published in the Journal of Neuroinflammation confirmed luteolin’s ability to inhibit cytokine expression in microglia.2 (Cytokines are inflammatory markers.)

Microglia are a type of nerve cell found in the brain and spinal cord, and they play an active role in central nervous system immune defense. They are considered neuroprotective, meaning they protect brain tissue and promote neurological regeneration after injury.3

This explains luteolin’s ability to preserve memory, an observation confirmed by a 2010 University of Illinois study that found luteolin reduces inflammation in the brains of aged mice.

“Luteolin consumption improved spatial working memory and restored expression of inflammatory markers in the hippocampus compared with that of young adults.”4

It goes on to point out that luteolin did not have an effect on the memories or inflammatory markers in younger, adult mice. So it makes sense to ingest plenty of this polyphenol as we age.

Amazingly, head researcher Rodney Johnson remarked that luteolin “allows working memory to be restored to what it was at an earlier stage.”4

So it’s great news that luteolin is found in common, everyday foods that are easy to obtain and are also good for your bones.

The majority of the luteolin-rich foods are also Foundation Foods listed in the Osteoporosis Reversal Program:

In addition to eating luteolin-rich foods, you can also protect and enhance your memory with regular exercise. And the more variety, the better – research shows that when your exercise regimen involves learning new moves, it stimulates focus and attention and improves memory.5

The Densercise™ Epidensity Training System has 52 moves that cover four weeks of exercise, so by the time you begin again with Week 1, it will present new challenges to your bones and muscles. In addition, each week we publish a Weekend Challenge to add more of the variety that’s so crucial for brain and bone health.

Isn’t it refreshing to know that while we’re rejuvenating our bones with Foundation Foods and Densercise™, we’re also enhancing our memory? That surely brings peace – and preservation – of mind!