High Cholesterol And Your Bones: The Surprising Link (Plus 10 Foods That Naturally Lower Your Cholesterol) - Save Our Bones

High Cholesterol And Your Bones: The Surprising Link (Plus 10 Foods That Naturally Lower Your Cholesterol) 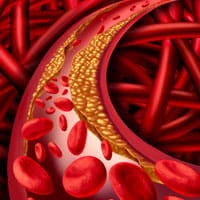 “You have to lower your cholesterol to avoid heart disease.”

Chances are you’ve heard these statements from your doctor or read them online. Statements like these have been in common parlance for so long that they’re considered standard knowledge.

But there’s only one problem. The above statements are incorrect, and so are many other conventional ideas about cholesterol perpetuated by the Medical Establishment and Big Pharma.

Today we’re going to debunk these and other cholesterol myths, and reveal the truth about the dangers of lowering cholesterol too much, the bone-damaging effects of statins, and the fascinating connection between lipids and your bones.

Plus, you’ll find a list of cholesterol-lowering foods you can eat instead of taking the drugs.

To begin, we first need to answer a basic but crucial question:

Just What Is Cholesterol?

There’s a great deal of misinformation about this, so I’d like to clarify the facts about it.

Cholesterol is a wax-like substance produced by the liver. Contrary to popular belief, very little cholesterol comes from the foods we eat; the majority, around 75 percent, is manufactured by the liver. In fact, low-fat diets encourage high blood cholesterol, and we’ll see why in a moment.

Cholesterol is a building block for adrenal and reproductive hormones, including estrogen, progesterone, DHEA (dehydroepiandrosterone, a type of androgen), and others. Keeping hormones in natural balance is very important for bone health.
We also need cholesterol in our skin. It prevents excessive drying, and cholesterol is converted to Vitamin D3 when our skin is exposed to sunlight. Vitamin D3 is essential for bone health, and safe sun exposure is the best way to get the right amount.

Immunity is also influenced by cholesterol. This sticky substance binds toxins so they can be removed from the body, thus guarding against tissue damage. In fact, cholesterol is necessary for maintaining the integrity of cell membranes and insulating nerve cells.

One of cholesterol’s most important jobs is its role in the formation of a substance called cholic acid. This acid is used by the body to manufacture bile salts, which emulsify fats so they can be digested. Remarkably, most of the body’s cholesterol – between 60 and 80 percent – is used in the production of cholic acid.

Now you can see how a low-fat diet increases blood cholesterol. If the need for bile is reduced due to little fat in the diet, then the cholesterol produced by the liver is only partially used. According to a study published in the American Journal of Nutrition, dietary fat has a significant effect on bile salt metabolism.

After studying the effects of high-, intermediate-, and low-fat diets in six men (the diets contained the same amount of cholesterol ), the researchers concluded that:

“…both low-fat and high-fat diets have major effects on human bile salt metabolism, which are reflected in decreased turnover and synthesis of primary bile salts and, consequently, in impaired removal of cholesterol from the body via bile salts.”1

In other words, a low-fat diet discourages the production of bile, and bile is necessary to remove excess cholesterol from your bloodstream.

Because cholesterol is such an important moiety in so many body processes, it’s clear that there are …

Dangers In Lowering Cholesterol Levels Too Much

Now it becomes obvious why lowering your cholesterol by artificial means can be quite harmful. All of the above processes are greatly hampered when cholesterol levels plummet through the use of drugs.

Over the years, what the Medical Establishment considers “normal” has changed (this is not unlike the lowering of diagnostic criteria for osteoporosis and the invention of osteopenia). The goal in lowering the bar, so to speak, is to sell more drugs. It’s a classic case of marketing a disease to market a drug.

Your doctor will likely tell you that serum cholesterol should be below 200 mg/dL, which is quite a contrast from years ago, when 175 to 275 (and higher) was an acceptable range. The normal range was lowered to accommodate the cholesterol-lowering effects of the statins, which take the cholesterol down below 200. So that became the “new normal.”

But What About “Good” And “Bad” Cholesterol?

The majority has been led to believe that there are two types of cholesterol, low-density lipoprotein, or LDL (the “bad” kind) and high-density lipoprotein, or HDL (the “good” kind), and that lowering the LDL is important for preventing heart disease. In actuality, the liver produces more than two kinds of cholesterol, and LDL is not inherently bad.

In fact, because LDL contains more fat than protein, it works to transport non-water-soluble, healthy fatty acids through the bloodstream to various tissues. HDL plays a role in the transport of hormones throughout the body and of cholesterol that’s bound to toxins back to the liver for processing.

Both forms of cholesterol – and the other forms, such as very low-density lipoprotein (VLDL) – are necessary for vital life processes. There is a constant adjustment of the LDL to HDL ratio in response to the body’s varying needs that change from day to day. It’s a remarkable biological balancing act that, like bone remodeling, can’t be forced into numerical parameters without causing harm.

In contrast to natural, food-based management of cholesterol, cholesterol-lowering drugs bypass the body’s natural system of “checks and balances” so to speak, causing unhealthy and at times dangerous imbalances. Statin drugs are no exception. In fact, they have an effect on the body that is very similar to bisphosphonates, the most commonly prescribed osteoporosis drugs.

The Startling Similarity Between Statins and Bisphosphonates

Interestingly enough, both statins and bisphosphonates block the same biological pathway, a topic discussed in detail in Chapter 4 of the Osteoporosis Reversal Program:

“Like statins…nitrogenous bisphosphonates begin their action on bone metabolism by blocking the enzyme farnesyl diphosphate synthase (FPPS) which is involved in the mevalonate pathway (also called the HMG-CoA reductase pathway).”

While statins do not bind to bone surfaces, blocking this pathway results in the production of osteoclasts that lack the ruffled border necessary for adherence to bone, thus preventing them from resorbing bone as part of the healthy remodeling process.

In addition, FPPS is formed into FPP, another enzyme that’s a catalyzer for CoQ10, or ubiquinone. CoQ10 is present in nearly all cell membranes, where it functions as an energy source for cellular mitochondria. In fact, a lack of CoQ10 may increase the risk of atrial fibrillation and cardiovascular disease, a discovery that prompted scientists in the early 1990s to recommend a CoQ10 supplement when taking statins. Unfortunately, this research-backed recommendation was (and still is!) largely ignored by the medical community.

By blocking the enzymatic pathway, statins, like bisphosphonates, have the potential to cause a CoQ10 deficiency.

But Wait… Doesn’t Cholesterol Build Up And Block Arteries?

While it’s true that cholesterol does factor in to the accumulation of plaque in the arteries, to contribute to a blockage the cholesterol must first be oxidized. Oxidized cholesterol does not exist in whole fatty foods like eggs, but when it’s processed into something else, such as a hydrogenated oil or powdered eggs, it suffers free radical damage and becomes oxidized.

It’s not controlled by lowering cholesterol with statins. At the Save Institute, we never recommend taking either bisphosphonates or statins. Rather, the Saver approach is to manage health through nutrition and the consumption of foods high in the aforementioned antioxidants, which we’re going to look at in a moment. First, I want to point out a very important connection between high serum lipoproteins and fracture risk.

Triglycerides are derived from glycerol and fatty acids, and high levels of both tend to go hand in hand. An insightful new study shows that fracture risk is closely linked to triglyceride levels.

Researchers followed 2062 pre- or early peri-menopausal women for 13 years. None of the women had a history of fracture. At the end of 13 years, the women with high triglycerides were more likely to have sustained a fracture than those with lower triglycerides – more than twice as likely, in fact.

That means that some of the women – 147 of them – had fractures that occurred without trauma such as hard impact. The fractures included the feet, ankles, or wrists.

Among those women who began the study with high triglycerides, the fracture risk was more than two and a half times greater than in the lower-triglyceride women.

While other bone-weakening factors may come into play besides triglycerides, high triglycerides can be interpreted as a red flag that something is amiss metabolically. They also indicate that cholesterol levels are correspondingly on the increase.
One of the key ways to keep these numbers in range is through nutrition. And the good news is that there are foods that work with your body’s biological balancing mechanisms to keep lipoproteins in check.

As you can see, nearly all of the above foods are Foundation Foods. So if you’re following the Osteoporosis Reversal Program, you’re already getting plenty of them.

But there’s more you can do to keep lipoproteins in check.

Exactly how exercise lowers cholesterol is somewhat conjectural, but the evidence clearly shows that regular exercise does in fact keep cholesterol and lipoproteins within current desirable ranges.5 According to research, this may be due to the ability of exercise to influence the size of lipoprotein particles, making them larger and less dense.

In addition, exercise increases the transport of cholesterol out of the bloodstream and back to the liver for processing and removal. Still another way that exercise helps is by decreasing cholesterol absorption from the small intestine into the bloodstream.

It’s important to point out that cholesterol made by the liver is not reduced by exercise; it’s the dietary cholesterol and lipoproteins – the oxidized cholesterol from processed fats – that are reduced by physical activity.

So along with nutritious, cholesterol-lowering foods, exercise helps keep serum lipoproteins in check, but not dangerously low as with statin drugs. This is great news for Savers, who are already eating these foods and exercising regularly as part of the Program. Clearly, the Osteoporosis Reversal Program is a whole-body, multi-faceted approach to managing osteoporosis.

As part of this holistic approach, the Densercise™ Epidensity Training Program was created to be implemented in conjunction with the Osteoporosis Reversal Program. Densercise™ rounds out the Program by providing all the myriad benefits of regular exercise, from fracture resistance and much more.