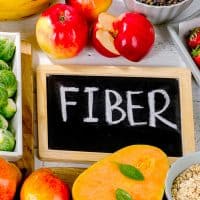 Aging is a natural part of life, but there is a fine line between getting old and aging gracefully. The average life expectancy in the US is approaching 79 years. While that might seem like a reasonable lifespan, chronic illness is on the rise. In fact, more than 70 million Americans age 50 and over suffer from at least one chronic condition, and 11 million people are currently living with five or more chronic conditions in the US. An extended lifespan does not necessarily equal a long “healthspan.”

Australian scientists have recently discovered the key to what they deem “successful aging.” They determined that consuming a high-fiber diet lowers the risk of several diseases often associated with aging, such as dementia, depression, cancer, heart disease, and stroke. This further confirms that while genetics plays a role in aging, lifestyle choices exert much more influence on how we age.

Today we discuss how and why a high-fiber diet can help improve your overall health and your bone health, giving you the best chance to live a long and productive life.

The Aging Factor – Genetics Or Lifestyle?

Various factors contribute to a person’s longevity, and while we may want to look to our parents to help predict our future, twin studies have illustrated that genetics accounts for a mere 20 to 30 percent of lifespan.1

In fact, studies have shown that lifestyle choices have a far more significant impact than hereditary factors on our life expectancy.2 This is good news, especially for health-conscious Savers, as it means that the choices that we make directly influence the aging process.

A 2017 study published in the New England Journal of Medicine found that consistent consumption of healthy foods contributes to a longer life.3 Harvard researchers monitored the eating habits of more than 50,000 women and 25,000 men and found that those who improved their diet by incorporating more whole grains, fruits, and vegetables were 8 to 17 percent less likely to die over the next twelve years.

Many lifestyle choices influence longevity including nutrition, physical activity, exposure to toxins, and stress, just to name a few. New evidence suggests that a diet rich in fiber also contributes to a longer and healthier life.4

Utilizing data from more than 1,600 adults over the age of 49, Australian researchers examined the relationship between the consumption of carbohydrates and healthy aging. Specifically, they followed the adults for ten years, studying the relationship between dietary glycemic index (GI) and glycemic load (GL), carbohydrate, sugars, and fiber intake with successful aging. Successful aging was defined as an absence of several health conditions such as depression, dementia, respiratory illness, cancer, and diabetes.

Ten years later, 249 (15.5%) participants had aged successfully. While one might suspect that sugar intake had the highest impact on successful aging, it was fiber that made the most significant difference. Even though older adults who consistently consumed a diet high in dietary GI and GL had a greater risk of dying over the ten years, the researchers did not find that these factors influenced successful aging. The study concluded that individuals with the highest intake of fiber had a nearly 80 percent greater likelihood of living a long and healthy life.

The authors offer several hypotheses as to why increased dietary fiber intake promotes longevity. Dietary fiber has been shown to have anti-inflammatory properties. The authors propose that since aging is associated with a low-level systemic chronic inflammation and a decrease in metabolic function, sufficient fiber intake helps to prevent the hyperglycemic peaks that occur after eating, which results in increased oxidative stress in the body.

This study was not the first of its kind to examine the relationship between fiber intake and longevity. In 2011, researchers reviewed data from the National Institutes of Health-AARP Diet and Health study and discovered that those who consumed foods rich in fiber had a significantly lower risk of death.5 For the study, scientists followed individuals ages 50 to 71 years old and found that those who ingested the most fiber had a 22 percent lower risk of dying compared to those who consumed the least.

Unlike other carbohydrates, dietary fiber is not digested by gastrointestinal enzymes. Found in vegetables, fruits, legumes, and whole grains, the benefits of fiber are numerous. Fiber has been shown to lower cholesterol, reduce the risk of heart disease,6 lower serum glucose levels,7 and improve digestive health.

Fiber impacts bone-health both indirectly and directly. First, as discussed earlier, fiber is well-known for its anti-inflammatory effect in the body. Savers know that inflammation is detrimental to bones, with research illustrating that even modest inflammation increases the risk of fractures.8 Increasing fiber intake can protect your bones by helping to reduce inflammation in the body.

A 2017 Boston University study examined the relationship between dietary fiber intake and bone loss.9 The researchers found that fiber intake impacts men and women differently. The male study subjects who consumed higher levels of fiber experienced less bone loss at the femoral neck versus those whose fiber intake was lower. Interestingly, although the study did not find an association between fiber intake and hip loss in women, they did discover that fiber from vegetables was protective against spinal bone loss in women.

Further, research conducted in 2016 at Purdue University illustrates that increasing fiber intake during adolescence and menopause can help to build and maintain calcium in bones. Scientists examined two studies and found that supplementation with soluble corn fiber, which is a prebiotic, helps the body to better utilize calcium.10

Savers Already Have The Key To Successful Aging

The good news for those following the Osteoporosis Reversal Program is that you are already consuming a high-fiber diet. The 80/20 pH-balanced nutrition is plentiful in fiber-rich alkalizing vegetables and fruits, balancing the acidifying effect of animal protein and most grains and legumes.

The Save Institute is ahead of the curve when it comes to bone health and overall health, as we know that many of the answers lie within the food that we consume. Following the 80/20 nutritional plan automatically provides the nutrients required to live a long and healthful life.