4 Scientific Secrets To Live Longer (And Build Your Bones) 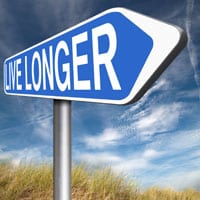 More energy, decreased inflammation, improved posture and balance, and enhanced mental clarity are just a few of the benefits of the Osteoporosis Reversal Program that go beyond bone health.

But that’s not all. Research has tied a natural, drug-free bone-smart lifestyle and diet to longevity, drawing a sharp distinction between the Program’s drug-free, life-enhancing approach to osteoporosis and the potentially life-shortening effects of Mainstream Medicine’s pharmaceutical regimen.

So in today’s post, I’m thrilled to discuss three 100% natural bone-smart practices that are scientifically proven to increase your lifespan.

1. Run For Your Life! An Inspiring Story

One of the sad myths about getting older is that after a certain age, you’re “too old” to start something new. An incredible and inspiring athlete by the name of Olga Kotelko busts that myth once and for all!

After starting a career in track and field at the not-so-tender age of 77, Olga was still breaking athletic records when she was 94. At her death in 2014 at the age of 95, the Canadian track star had won over 750 gold medals and held every single track and field record she ever attempted in her age group – over 30 of them! It’s also worth pointing out that in 2010, when she was 91 years old, Olga surpassed many athletes who were two age brackets younger!

This inspiring woman initially chose track and field because she wanted to use the skills she had developed while playing softball in the 1980s – throwing and running.

It’s no secret that running is excellent for bone health; Savers are aware that it is a bone-building, weight-bearing exercise, which is crucial in “turning back the clock” on bone loss. But if you’re not a runner, don’t despair; research shows that walking has many of the same benefits, including decreased risk of cardiovascular disease, diabetes, and hypertension. Research also shows that running and walking can even lower the risk of cataracts.

And there are more benefits to reap. According to a Canadian study, running can give you a longer lifespan.

Scientists explored the “molecular details”1 behind the research-backed concept that exercise improves cognition and slows degeneration of brain tissue associated with aging and/or disease. So to dig deeper into this concept, they experimented on mice.

First, the researchers destroyed a particular genetic component (the Snf2h gene) in the mice, thus impairing their cerebellar development and producing mice with abnormally small cerebella, “poor motor function, progressive ataxia, and death between postnatal days 25–45.”1 Mice normally live about one year; a lifespan of a mere 25-45 days is significantly shorter.

When these cerebrally-compromised mice were allowed to run on an exercise wheel, however, an “endogenous brain repair mechanism”1 was triggered, and the mice lived out full lifespans of one year.1

Investigating further, scientists discovered the key that unlocked this mechanism: a nerve growth factor molecule known as VGF. Stimulated by exercise, VGF restored the neural damage in the mice’s brains, revealing at least one of the means by which exercise reverses and prevents neurological degeneration.

In addition, the mice that ran showed improved balance and increased production of myelin, the fatty sheath that surrounds the nerves and allows signals to be transmitted smoothly and quickly throughout the body.

How Much Exercise Is Optimal For Increased Longevity?

The answer may surprise you. While the recommended amount of physical activity (according to the Physical Activity Guidelines for Americans) is a minimum of 2 ½ hours of moderate exercise per week, research shows that longevity is increased by 20% even at levels below the recommended weekly hours.2 Once again, the Osteoporosis Reversal Program, with its recommendation of 15 minutes of moderate exercise three times a week, plus additional time spent focusing on weight-bearing exercises is well ahead of the game.

Another way in which exercise promotes longevity is through the reduction in stress and its attenuating hormone, cortisol. This stress hormone degenerates bone, but regular exercise reduces cortisol levels, as does a diet rich in polyphenols.

The Role Of Food In Promoting Longevity

Many Foundation Foods on the Osteoporosis Reversal Program are rich in stress-busting plant chemicals such as quercetin and astaxanthin, which are found in the following foods:

Clearly, what you eat affects your lifespan. But what you don’t eat is equally influential, as another body of research shows.

The Osteoporosis Reversal Program does not advocate strict vegetarianism or veganism, although it is compatible with these types of diets. Rather, the Program recommends moderate animal protein intake that is well below what the average Westerner consumes. Not only is this pH-balanced diet ideal for reversing and preventing bone loss; it also increases your lifespan, as a breakthrough study confirms.

Over 6,000 adults between the ages of 50 and 65 were evaluated for the study, which was conducted by researchers at the University of Southern California. Participants’ consumption of milk, cheese, and meat – all rich sources of animal protein – were analyzed and they were divided into three groups: high (at least 20% of daily calories from plant and/or animal protein), moderate (10-19%), and low-protein (less than 10%).

The results revealed a 74% greater likelihood of early death among high-protein eaters, especially those whose source of protein was mostly animal-based. In fact, those who consumed more animal protein showed an increased risk of developing diabetes and cancer as well.3

Another connection between longevity and protein involves the kidneys. High amounts of animal protein can damage your kidneys, and so can immoderate consumption of other unhealthy foods such as sugar, table salt, and caffeine.

Therefore, it’s important to be aware of the type of protein you’re consuming. Excessive animal protein is acidifying in addition to contributing to early death; and processed meats like bacon and sausage are even more of a health hazard according to research.

The bottom line is, animal protein is best eaten in small amounts as part of a pH-balanced diet, and should consist of free-range, grass-fed, organic products as much as possible.

Fiber has become something of a health food poster child, and food manufacturers in the recent past touted their various products’ fiber content to boost sales. While it’s not a cure-all, fiber really does play some important roles in health, including bone health.

The two types of fiber, soluble and insoluble, are both healthful in different ways. Soluble fiber absorbs water in the small intestine, forming a gel-like substance, while insoluble fiber passes through the digestive process relatively unchanged.

Both types of fiber bind to toxins so they can be removed from the body, which gives a significant boost to your liver and prevents toxic build-up and inflammation. Inflammation is implicated in a number of chronic, potentially deadly diseases such as heart disease, and inflammation also increases fracture risk.

What a contrast with poisonous osteoporosis drugs, which add to the body’s toxic load, wear out the liver and kidneys, and increase inflammation!

Perhaps it’s fiber’s anti-inflammatory effects that contribute to its ability to lengthen lives, as no fewer than three studies show.

Australian researchers examined the data from the Blue Mountains Eye Study, a comprehensive analysis that examined the dietary habits of over 1,600 adults over 50 years of age, including fiber intake. Researchers were looking for “successful aging,” defined as growing older naturally without disease and disabilities such as diabetes, glaucoma, cancer, and dementia.

Ten years after the initial analysis, 249 of the participants had “aged successfully,” and the common thread among these achievers was high fiber intake.4 The study’s conclusion is as follows:

“Consumption of dietary fiber from breads/cereals and fruits independently influenced the likelihood of aging successfully over 10 years. These findings suggest that increasing intake of fiber-rich foods could be a successful strategy in reaching old age disease free and fully functional.”4

Both the UK and the US have recommendations as to daily fruit and vegetable intake; but an English study shows that both are woefully inadequate.

The research team reviewed seven years of data collected from national health surveys of individuals over the age of 35. The analysis covered more than 65,000 people.

After taking a close look at the data, the scientists concluded that “fruit and vegetable consumption was associated with decreased all-cause mortality” with vegetables proving more effective at increasing longevity than fruits.5

The research revealed that fresh fruits and vegetables are undeniably the most potent, with frozen and canned fruit associated with decreased longevity.5

How much is optimal? According to the study authors, seven servings a day is ideal, leading to a 42% decrease in mortality.5

The adolescent girls fared similarly. Calcium absorption, rather than retention, was reviewed and the girls were given the same fiber regimen as the postmenopausal women. Calcium absorption improved 12% for both the 10-gram and the 20-gram group.7

While the studies used corn fiber, corn is not emphasized on the Program due to its high potential for GMOs. Instead, here are some other foods that are equally high in bone-boosting soluble fiber:

Once again, the bone-building Program is on the ball!

4. Are You Getting Enough Of This Lifespan-Enhancing Mineral?

If you’re following the Osteoporosis Reversal Program, you are getting enough of the Foundation Supplement magnesium; but sadly, the vast majority of Westerners are deficient in this mineral. Despite this, your doctor probably never mentioned magnesium in relation to osteoporosis. Rather, they tend to prescribe enormous doses of unhealthy calcium carbonate and suggest preventative “therapy” such as taking as aspirin a day to stave off cardiovascular disease (how ironic, given that calcium carbonate increases the risk of heart attack!).

Instead, they should recommend plant-based calcium in reasonable doses along with increased magnesium intake, since it’s been scientifically shown to greatly reduce the risk of cardiovascular disease and increase lifespans, as per a German study.

Researchers checked the serum magnesium of more than 4,000 participants who obtained their magnesium through foods, not supplements. After 10 years of followup, the conclusion was stunning:

In fact, the all-cause mortality rate was reduced by a whopping 85% in the high magnesium group, and cardiovascular deaths were decreased by 55%.8 Researchers arrived at this conclusion independent of other cardiovascular risk factors, such as hypertension and blood pressure drug therapy.

It’s really not surprising that magnesium levels have such a strong influence on longevity. After all, magnesium is involved in hundreds of body processes besides being absolutely crucial for bone health. This is why the symptoms of magnesium deficiency are so varied and involve so many body systems.

Food-based magnesium is most readily bioavailable, so here are the Foundation Foods that are richest in this mineral:

At The Save Institute, it’s understood that drugs, whether prescription or over the counter, are most certainly not the answer to a healthful and long life. Mainstream Medicine takes a “lesser of two evils” approach – there may be dangerous side effects (including a shorter lifespan!), but it’s seen as preferable to the “disease” they are treating.

Here’s the kicker: osteoporosis is not even a disease. It’s a symptom of an imbalance that is correctable through pH-balanced nutrition and regular exercise – just the “prescription” that the Osteoporosis Reversal Program offers.