Osteoporosis Benefits Of Melatonin Revealed - Save Our Bones 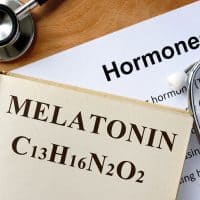 A recent study conducted at McGill University confirms that melatonin increases bone density and strengthens bone in older women. This is great news for Savers since there are several natural ways to increase melatonin levels without taking a supplement.

Today we’ll examine this study to understand how melatonin improves bone health, and we’ll also look at melatonin’s other valuable qualities. Then we’ll delve into ways to maintain desirable melatonin levels by the inclusion of certain foods and avoidance of specific substances.

So let’s begin with the study on…

Researchers at McGill University’s School of Dentistry, led by professor Faleh Tamimi, have found that bones of older rats increased in density, strength, and flexibility when given melatonin supplements.1

Melatonin is a hormone produced by the pineal gland, a pea-sized gland located right above the very middle of the brain. The pineal gland is inactive during the day, but when the sun sets, the darkness of night activates a special part of the hypothalamus called the suprachiasmatic nucleus, which in turn signals other parts of the brain to begin the biochemical processes that prepare our bodies for sleep. Among those preparations is the activation of the pineal gland’s melatonin production.

As the melatonin levels in the bloodstream rise, we begin to feel less alert, facilitating sleep, and those levels remain elevated for about 12 hours. During the day, melatonin levels are low. This sleep-wake cycle, also called the circadian rhythm, plays an important role in health.

McGill’s experiment was conducted on twenty 22-month-old laboratory rats, divided into two randomly assigned groups. Physiologically, a 22-month-old rat is equivalent to a 60-year-old human. One group was treated for 10 weeks with melatonin, and the other group served as a control group without receiving any treatment.

At the end of the 10 weeks (which in the lifespan of a rat equates to about six human years), the rat femurs were tested by micro-computed tomography, histomorphometry, and a three-point-bending test.

Here are the results, as published in the study:

These compelling results are the first evidence indicating that dietary melatonin supplementation is able to exert beneficial effects against age-related bone loss in old rats, improving the microstructure and biomechanical properties of aged bones.”1

While this study establishes the positive impact of melatonin on bone health, it doesn’t delve into the mechanics by which this occurs. Fortunately, our understanding of the bone remodeling process provides the information we need to uncover the reason for these results.

Sleep is an important part of the remodeling cycle of bone. In fact, studies have established a clear relationship between lack of sleep and osteoporosis. In a nutshell, lack of sleep disrupts the crucial bone remodeling process, stopping new bone formation without altering the pace of bone resorption.

Research performed on rats found that when the study subjects lacked sleep, they stopped producing new bone, but bone resorption was not affected. Their bones decreased in density and tensile strength, simply because they weren’t getting enough sleep.2

Since melatonin helps to regulate the circadian rhythm and to sleep more soundly and regularly, it facilitates building fracture-resistant bones.

But that’s not the only bone health benefit of melatonin…

Glutathione, also known as the Master Antioxidant, offers measurable bone health benefits by turning destructive free radicals into harmless molecules. It does this by offering a spare electron to these deficient molecules that would otherwise cause harm through the theft of an electron.

Additionally, glutathione is involved in a great number of biochemical processes in the body, including a key role in the liver in detoxification reactions.3 As Savers know, the liver plays a crucial role in the elimination of toxins, which is critical for bone health.

Melatonin has been shown to increase glutathione levels, and a great many studies have linked melatonin to reductions in oxidative damage and toxicity.5

Either one of these bone benefits, sleep regulation or glutathione increase, would make melatonin an essential component of bone health; together they render this hormone an unsung hero of bone-building.

The antidepressants Prozac or Celexa, benzodiazepines including Ativan or Xanax, and antipsychotics such as Abilify or Seroquel, also inhibit melatonin synthesis.

You can increase melatonin levels by consuming melatonin-rich foods. Should you wish to take a supplement, the Save Institute recommends the lowest possible dose.

Like so many biological imbalances, a melatonin deficiency can be addressed without taking drugs or supplements. Just look at this diverse (and delicious) list of melatonin-rich foods:

The remarkable overlap between melatonin-rich foods and Foundation Foods provides a two-for-one bone-building bonus every time you incorporate them into your meals. The complete list of Foundation Foods is longer than the one above, and the culinary possibilities they provide are endless.

You can learn more about those foods in the Save Institute’s cookbook and meal planner Bone Appétit. It contains more than 200 recipes for breakfast, lunch, and dinner; spanning smoothies to salads, and main courses to desserts.

Eat Your Way to Stronger Bones

Isn’t it remarkable that eating better can help you sleep better? As the scientific studies we covered today show, it takes both to build strong and healthy bones.