Silica: The Mineral Your Bones Need That Your Doctor Probably Won’t Tell You About - Save Our Bones

Silica: The Mineral Your Bones Need That Your Doctor Probably Won’t Tell You About 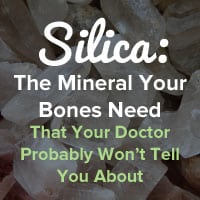 The Medical Establishment takes a “silver bullet” approach to health, isolating a particular biological process and “aiming” at it with a synthetic chemical. They then apply this to supplements, prescribing a single mineral, calcium, to help “treat” osteoporosis, along with prescription drugs.

Of course, the Establishment’s approach fails on many levels, and today we’re going to delve into this as we explore silica, a mineral that is vital for strong and healthy bones…yet chances are your doctor will never mention it. You’ll also learn how to get more of this important mineral.

Why Calcium Alone Is Not Enough

As it relates to supplements, the Medical Establishment ignores the issue of synergy and continues to prescribe large doses of a single mineral, typically calcium – and the wrong kind of calcium, such as calcium carbonate.

In addition, the mainstream fails to realize that a calcium deficiency in the bones (and elsewhere) can result from other mineral deficiencies and imbalances. No matter how much calcium you take in these cases, your bones will still be deficient. They require many other minerals to take up calcium, and one of those other minerals is silicon.

Before we embark on a discussion of this mineral, I’d like to clarify these two terms. Silicon and silica are often used interchangeably, but there is a difference: silica is the oxide form of silicon, meaning silica has an oxygen molecule attached via covalent bonding. It actually has an abundance of sulfur-oxygen bonds in its natural state. Silica is therefore often called silicon dioxide, which then gets shortened to silicon – hence the confusion.

Silica occurs in great abundance in the earth’s crust. In contrast, silicon is a single atom, not a molecule, and rarely exists in nature in its pure form. It’s nearly always in the form of silica, and that’s the form of this mineral we’re going to discuss today.

Silica And Your Bones

Silica is found not only in the earth’s crust, but also in the human body. It’s present in nearly all body tissue, including bone.

Silica levels tend to decrease as we age, yet it’s most important in the senior years because it prevents the decalcification of bones associated with age. It also prevents deterioration of connective tissue like collagen, which is vital for bones’ tensile strength.

Silica has the unique ability to “make the most” of available calcium, almost amplifying its effects in building bone. Silica accelerates the process of calcification and deposition in bone.1 It also improves bone matrix quality and facilitates bone mineralization, so it’s not surprising that fracture healing rates increase in the presence of silica, even if calcium is relatively low.2

Other Health Benefits Of Silica

Deficiency in silica has been linked to diseases like Alzheimer’s, and in fact, it’s been called the missing link in anti-aging plans. Silica inhibits aluminum absorption in the brain and counteracts its effects in the body overall, making silica of particular importance for the elderly.3

Too little silica can bring about calcification of connective and soft tissue, causing stiffness and loss of elasticity. Considered symptoms of aging, these issues may well be symptoms of silica deficiency. Hair, skin, and fingernail health is enhanced by silica as well.

How To Get More Silica In Your Diet Through Foods

There are many delicious foods that are full of silica, and many of them are Foundation Foods listed in the Osteoporosis Reversal Program. Here are some particularly good sources of this mineral.

As you can see, when you’re following the Program, you’re getting plenty of bone-healthy silica, and you should aim to get at least 10 mg per day. To give you an example, a medium-sized banana contains about 6 mg of silica, and a carrot contains about 1.5 mg.

Silica Does Not Work In Isolation

It’s important to remember that just because we’re highlighting the virtues of a particular mineral, it does not mean you should run out and ingest massive amounts of it by itself.

This is why the Osteoporosis Reversal Program recommends complete supplementation with Foundation Supplements, as well as eating a variety of nutrient-rich foods, such as Foundation Foods, because they contain many different components that all work in synergy with each other for maximum benefits.

Silica plays a significant role to build bone and maintain its integrity and strength. Clearly, your bones need more than just calcium to rejuvenate and grow strong, and the Osteoporosis Reversal Program has always recognized this.

2 Price CT et al. “Silicon: a review of its potential role in the prevention and treatment of postmenopausal osteoporosis.” International Journal of Endocrinology. April 2013