The 2020 List Of Pesticide Laden Foods - Save Our Bones 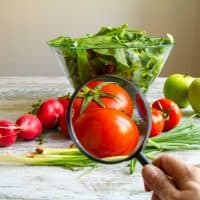 A recently-published study analyzed the existing scientific literature and found evidence that supports the Save Institute's recommendation to consume organic produce whenever possible.

Today, we'll have a closer look at that study and its findings on the relationship between dietary pesticide exposure and a variety of medical conditions. Then you'll get the just-released EWG's yearly lists of the produce items with the most and least residual pesticides.

This is essential information for avoiding bone-harming toxins, and this year's report contains some shocking news about a previously untested food: raisins.

A study published this year in the journal Nutrients took on the task of systematically assessing the health impacts of an organic diet in comparison to a conventional (non-organic) one.

After analyzing the results of 35 papers detailing clinical trials and research studies, they were able to paint a picture of our current scientific understanding of the ways in which non-organic foods affect our health.

While the authors note that more research is needed to further explore the benefits of an organic diet, and exactly what is required to attain them, it's not difficult to conclude that consuming fewer pesticides will have a positive effect on health.

A meta-analysis of studies examining the health outcomes linked to organic vs conventional diets found that participants who consumed organically-grown foods had lower urinary pesticide concentrations and improved health outcomes in certain areas, including the incidence of non-Hodgkin lymphoma and BMI.

Use These Lists To Avoid Contaminated Produce

We can put the lessons learned from the study above into practice using the newly released Dirty Dozen and Clean Fifteen lists from the EWG. Every year the EWG compiles the results of the past few years of the USDA's Pesticide Data Program and creates two lists.

This year they found that nearly 70 percent of the fresh produce sold in the U.S. contains residues of chemical pesticides used in farming. And surprisingly, this year's report included a food that has not previously been tested, but which proved to be the most contaminated item tested: raisins.

Raisins would take the first spot on the Dirty Dozen list if they were included alongside the fresh produce. A shocking 99 percent of non-organic raisin samples had residue of at least two pesticides.

Even organic raisins were found to harbor a surprising number of pesticides, for reasons unknown. The EWG suggests substituting prunes for raisins whenever possible. But bear in mind that unlike raisins, prunes are acidifying, so adjust the 80/20 balance of your day's meals accordingly.

Only buy organic varieties of the foods listed in the Dirty Dozen, as these fruits and vegetables have been found to contain the highest levels of residual pesticides of all the produce tested.

Conversely, the foods on the Clean Fifteen list were found to have the lowest levels of pesticides, even when conventionally grown. If you can't get organic produce at all, then choose foods from this list to reduce your exposure to harmful chemicals.

The EWG uses information from the USDA's Pesticide Data Program to compile lists of the foods with the highest and lowest rates of pesticide contamination when conventionally grown. Use these lists to remember which foods to only by organic (The Dirty Dozen) and which foods are more likely to be safe if you don't have access to organic options (The Clean Fifteen).

If you're reading this list and realizing that you've been eating produce that likely contained pesticide residue, you can support your liver and other body systems with a healthy detoxing cleanse. The Save Institute specially designed the Osteoporosis Fresh Start Cleanse to support bone health and overall wellness, with a 7-day bone-accelerating program that will keep you feeling energized and fresh throughout.

Moving forward, try to choose organic varieties of all of your produce but especially any item on the Dirty Dozen List. In addition, substitute prunes or other dry foods of your choice for raisins whenever possible.

By avoiding pesticides and other harmful residual chemicals, you protect your body's toxin filtration system, and in doing so, you’re protecting your bones and your overall health.