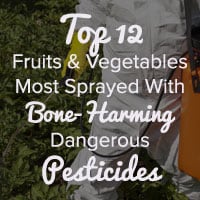 Pesticide residue on conventional produce is a very real health hazard, adding to your body’s toxic load and undermining your bone-building efforts. However, some foods are more heavily sprayed with pesticides than others.

The good news is that every year, the Environmental Working Group (EWG) puts together its Dirty Dozen list, which is a list of the top 12 most heavily-sprayed produce.

They’ve recently come out with an updated list, and today we’re going to take a close look at these “dirty” fruits and veggies, starting with a discussion on why eating them organically grown instead of conventional is important for your bones and your health.

Organic foods are not merely a trend or fad. As knowledge about the realities of pesticide use has grown, consumer demand for toxin-free produce has risen to an unprecedented degree, as has the demand for allergen-free and non-GMO foods.

Consumers are now much more aware of the toll these pesticides take on human health. This fact is well documented, as is the fact that pesticide residue remains on crops that have been sprayed.

In fact, even peeling produce does not help – the USDA tests for pesticide residue in the edible portion of foods, so foods with inedible peel, such as avocados, bananas, and others are tested after the peel has been removed, and in most cases, pesticide residues are still found.

On foods with edible skins, the testing is done after rinsing under running water, which underscores the point that pesticides are impossible to wash away completely. Not only can they penetrate the skins of foods, but the waxes used to prevent moisture loss during transport can trap pesticides in a waxy coating that can’t be washed off. And finally, the plants can take up the pesticides via their roots, thus infiltrating the fruit or vegetable.

Hundreds of pounds of pesticides are used for every acre of conventionally-grown produce. And these substances have been linked to serious health issues such as ADHD in children, breast cancer, depression, prostate and ovarian cancer, birth defects, and Alzheimer’s disease – to name a few.

This is of particular concern for parents of young children, whose smaller body size renders them more vulnerable to harm from pesticide ingestion. Research strongly suggests that pesticide ingestion is linked to ADHD and impaired intelligence,1 with further research pointing out that pesticide levels peak in children’s bodies during the summer months when fruits and vegetables are plentiful.2

To investigate this further, scientists tested pesticide levels in a group of 23 elementary children who had eaten conventional produce. The levels were monitored as the children switched to an all-organic diet, leading researchers to state:

“In conclusion, we were able to demonstrate that an organic diet provides a dramatic and immediate protective effect against exposures to organophosphorus pesticides that are commonly used in agricultural production.”2

Amazingly, the children’s bodies were nearly free of all pesticides after just five days on the all-organic diet.
If this is true for children, then it stands to reason that adults would also detoxify from pesticides upon eating an organic diet, and from choosing organically-grown versions of heavily-sprayed produce.

I understand that it’s not easy to buy every food organically grown, but we must keep in mind that accumulated toxins make it harder to maintain a desirable alkaline pH.

What makes this list so helpful is that if due to availability or other reasons you must choose between organic and conventional produce, you’ll have a handy reference to aid you in deciding which ones to buy organic and a concise resource of their bone health benefits. So let’s begin with…

This delicious berry has now replaced apples’ five-year run as the most heavily sprayed crop. A whopping 300 pounds of pesticides per acre are applied to strawberries in California fields, artificially jump-starting and prolonging the growing season and increasing yield.

This is crucial in light of the fact that strawberries are anti-inflammatory and rich in Vitamin C and antioxidants, earning them a place in the Osteoporosis Reversal Program’s Foundation Foods. Research also shows that these remarkable berries have many other health benefits, including pain relief and even reduced risk of esophageal cancer. So to keep from undermining the health benefits of strawberries and to take full advantage of all they have to offer, it’s particularly important to choose organic.

Once at the top of the list, apples have dropped to the second position in 2016 (but of course, they are still heavily sprayed with pesticides). Apples contain a flavonoid called phloridzin, which has been shown to increase bone density and decrease inflammation. They’re rich in Vitamin C, fiber, and boron, and a lot of their goodness is found in the peel. So organic is essential!

These peach-like fruits are indeed related to peaches and apricots, and have many of the same health benefits. They are alkalizing and full of Vitamin C and fiber. They are also high in potassium, making them an important buffer to the high-sodium diet so prevalent in the U.S.

Peaches are also alkalizing, and are a good source of bone-building boron. Also, their juiciness helps boost hydration.

This crunchy vegetable is extremely alkalizing, and it contains bone-healthy Vitamin K, folate, Vitamins B2 and B5, manganese, boron, and magnesium.

This richly-pigmented fruit is full of bone-smart polyphenols and anti-inflammatory substances like quercetin and courmarin. Grapes even have pain-relieving properties. But they have moved up from #7 to #6 on the Dirty Dozen list this year.

Sadly, cherries were not on the Dirty Dozen list in years past, but they made it this year. Cherries are a good source of bone-building silicon in addition to other vitamins and minerals that build bones, like manganese and copper. They are rich in antioxidant polyphenols, particularly anthocyanins and superoxide dismutase. Cherries even contain melatonin, helping regulate the body’s circadian rhythm.

With manganese, calcium, magnesium, and Vitamin K, spinach has much to offer your bones. Being a dark green, leafy vegetable, spinach is full of antioxidants, especially lutein and zeaxanthin. These are especially helpful for eye health.

Botanically a fruit, tomatoes are good sources of bone-rejuvenating nutrients like copper, Vitamin C, and silicon. They are full of lycopene, an antioxidant that’s also found in watermelon and pink grapefruit. Interestingly, research shows that cooking tomatoes makes lycopene more bioavailable by converting it to trans-lycopene.

Offering Vitamin C, silicon, and Vitamin K, bell peppers are a sweet and crispy vegetable that is a member of the nightshade family, like tomatoes, eggplants, and potatoes.

Cucumbers are rich in silicon, and are very hydrating as well as alkalizing. Silicon facilitates calcium uptake and plays a role in collagen formation.

Given how many of these foods are Foundation Foods, you can understand why the Osteoporosis Reversal Program advocates eating organic! In addition, almost all of the EWG’s “Clean Fifteen” (foods with little pesticide residue even when conventionally grown) are Foundation Foods: avocados, corn, pineapples, cabbage, sweet peas, onions, asparagus, mangoes, papayas, kiwis, eggplant, honeydew, grapefruit, cantaloupe, and cauliflower.

Remember the study on school children mentioned above? When they ate organically-grown produce, their pesticide levels were reduced to almost nothing in just five days.

With the Osteoporosis Fresh Start Cleanse, it takes just seven days to invigorate your liver and kidneys, so you’ll build your bones faster and more efficiently.

The entire cleanse is broken down into 6 easy steps that you follow for seven days. Step 2 of the Osteoporosis Fresh Start Cleanse features cleansing, detoxifying fruits and vegetables like apples, cherries, celery, cucumbers, and grapes… these are foods found on the Dirty Dozen list, so getting them organically grown makes a whole lot of sense.