Is Coffee Good For Osteoporosis And Osteopenia? - Save Our Bones

Is Coffee Good For Osteoporosis And Osteopenia? 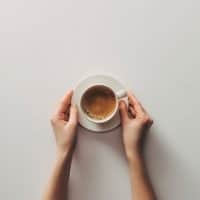 Millions of people around the world start their day the same way: with a cup of hot coffee. But few realize the health benefits that coffee provides.

In fact, many people are under the impression that coffee is unhealthy, but multiple studies have shown that coffee has many positive impacts on overall health. There is no conflict for Savers since moderate coffee consumption is compatible with a bone-healthy diet.

In this article, we'll look at five evidence-backed health benefits of coffee consumption, and we'll share a recipe for a coffee-based treat that's perfect for the coming summer months.

The Facts About Coffee And Osteoporosis

A study of 1,761 premenopausal Korean women’s dietary habits and bone mineral density (BMD) found that coffee consumption showed no significant association with BMD. However, the limited age range of the study leaves room for question.1

A much more comprehensive Swedish study followed 61,433 women for 20 years and compared their coffee consumption to their bone mass and fracture risk. The researchers found that women who drank four or more cups of coffee a day typically had 2%-4% lower bone density than women who drank less coffee.2

While the study didn’t find any association with fracture risk, loss of bone density is reason enough to limit coffee consumption to less than four cups a day.

Within those bounds, it’s safe to drink coffee, provided you’re mindful of its impact on your serum pH. Coffee is acidifying, but it can be part of a bone-healthy diet when consumed alongside alkalizing foods and avoiding acidifying sweeteners and creamers.

Drinking four or more cups of coffee a day leads to bone loss, but drinking coffee in moderation and balanced with alkalizing foods has been shown to boost certain health parameters.

A 2008 study with more than 100,000 participants examined the relationship between coffee consumption and mortality. Researchers found that coffee consumption coincided with as much as a 20% reduced risk of death.3 More simply put, coffee drinkers tend to live longer.

The study results uncovered an inverse relationship between coffee drinking and mortality risk. The scientists attributed this overall trend to a reduced risk for CVD (cardiovascular disease) mortality that was independent of caffeine intake.3

While the study didn’t examine the reasons for this association, the pattern was clear, and this is one benefit that you can get from decaf or regular caffeinated coffee.

More than 60,000 women in the United States participated in a study on the relationship between caffeine, coffee, and depression risk. Over the course of 20 years, the participants’ coffee consumption was compared to their incidence of clinical depression.

Fortunately, moderate coffee-drinking also reduces depression risk, provided the coffee is caffeinated. So you can reap this benefit without risking bone loss.

A study found that people who drink caffeinated coffee have a reduced risk for depression. The more coffee study participants drank, the lower their risk, but don’t forget that more than four cups a day has been shown to cause bone loss.

A study analyzing 30 years of data on the health and dietary habits of 8004 Japanese-American men has found an inverse relationship between coffee consumption and Parkinson’s Disease (PD). The more coffee participants consumed, the lower their chance of developing the disease.5

The researchers linked the effect to the caffeine in coffee. Participants who drank decaffeinated coffee were not any less likely to develop PD, but people who got caffeine from another source had reduced risk.

Participants who drank the most coffee (more than 4 cups per day) saw as much as a 60% reduced chance of PD. Fortunately, the effects are scalable, so you can drink a bone-safe quantity of coffee (less than four cups daily) and still see significant reductions in Parkinson’s risk.5

A large study has found that men who drink coffee have a reduced risk of developing Parkinson's Disease.

In 2010 a group of researchers gathered data from four studies on the relationship between coffee consumption and cognitive decline. The studies they examined were different in methodology and results, but their combined conclusion was clear: the caffeine in coffee has a neuroprotective effect.6

That means that coffee drinkers are less likely to experience cognitive decline, dementia, and Alzheimer’s Disease. Participants in these studies were as much as 65% less likely to develop these neurodegenerative conditions, because of the benefits of coffee.6

Much like the other studies, this inverse relationship was seen across consumption levels. So drinking coffee in moderation still benefits your neurological health.

A meta-analysis of various studies has found that coffee drinking reduces the risk of cognitive decline and neurological disease.

The results of several studies reveal that the caffeine in coffee can dramatically improve your body’s physical performance.

Caffeine’s stimulatory effect on the nervous system signals fat cells to break down in the body, which makes fatty acids available for fuel. This action had shown caffeine, in coffee or from other sources, to improve performance on exercise tests, increasing endurance and allowing participants to exercise longer before they reached exhaustion.7,8,9

Exercise is essential for general health and for building strong bones, so coffee’s ability to increase the intensity and duration of exercise has positive implications for Savers. These studies make clear that you should use coffee’s “get up and go” boost to get up and go exercise!

Researchers have found that caffeinated coffee increases the fatty-acids available to the body, and improves physical performance during exercise.

Get all these benefits in a tasty and alkalizing smoothie by using this easy recipe. It ensures that you're not consuming too much coffee, and adds additional bone-healthy ingredients to your morning pick-me-up.

Energize Your Commitment To Bone Health

Many Savers will express relief and delight that coffee can be included in a bone-healthy diet.

Try the coffee smoothie recipe above to instantly turn your morning coffee into an alkalizing breakfast, or pair your traditional cup of “joe” with an alkalizing treat to maintain an alkaline pH. Feel proud of the time you've put into making informed, healthy choices. You deserve it!