Confirmed By Science: Flavonoids In Tea Lower The Risk Of Fracture - https://saveourbones.com

Confirmed By Science: Flavonoids In Tea Lower The Risk Of Fracture 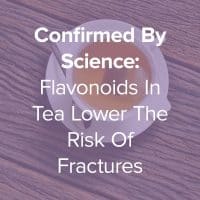 Discovered in 2737 BC by Chinese Emperor Shen Nung, this 5,000-year-old beverage is steeped in history. As legend has it, the skilled ruler was boiling water as was customarily done to render it safe to drink. While boiling the water, a dead leaf fell into the pot. The emperor drank the beverage and thoroughly enjoyed it, and thus, tea was born.

You might be surprised to learn that tea is the most widely consumed beverage in the world next to water, and for good reason. In addition to its numerous health benefits, tea plants are rich in flavonoids that have been scientifically proven to strengthen bones.

Further confirming the important role tea plays in bone health, a recently published Australian study shows that drinking tea can reduce the risk of bone fractures by 30 to 40 percent.

So, grab a cup of tea, find a comfy seat, and read on!

Researchers from Flinders University tracked the health of nearly 1,200 women over the age of 75.2 Over the course of a decade, the women in the study suffered 288 broken bones, with the majority being hip fractures. However, women who drank at least three cups a day of black tea were more than a third less likely to suffer a broken bone than occasional tea drinkers. In fact, for each cup of tea consumed each day, there was a 9% decrease in the risk of a fracture.

What Makes Tea So Beneficial For Bones?

So what exactly makes tea beneficial for bones? Researchers of the study concluded that it was the presence of flavonoids in the tea that offers a protective factor for bones. In fact, the women in the study with the highest flavonoid intake had the lowest risk of fractures. Of the seven major classes of flavonoids, flavan-3-ols, flavonols, and flavones were the most associated with reduced fractures.

Flavonoids are a large group of plant pigments called polyphenols. Numerous studies discuss the various health benefits associated with polyphenols.3 In addition to their overall health advantages, they also have been shown to influence bone growth by increasing osteoblast production.

Flavonoids have powerful antioxidant and anti-inflammatory effects on the body. With over 6,000 different types, they are responsible for giving fruits and vegetables their vibrant colors. Consumption of flavonoids has been shown to improve longevity,4 lower cardiovascular disease risk,5 and reduce cancer risk.6 It’s relevant to mention here that the Osteoporosis Reversal Program devotes an entire chapter to the topic of antioxidants, including polyphenols.

Flavonoids are found in high concentrations in tea, which is particularly rich in certain flavonoid classes such as flavan-3-ols (or catechins) and flavonols (for example, quercetin)7. Tea provides approximately 83% of the total intake of flavonoids in the American diet, followed by citrus (4%) and wine (2%)8. And flavonoids are present in many of the Foundation Foods in the Osteoporosis Reversal Program.

Are All Teas Created Equal?

The kinds of flavonoids vary depending on the type of tea. Traditional teas, such as green, oolong, and black tea come from the Camellia sinensis plant. The leaves are simply processed differently. While green tea leaves are not fermented and left whole, black and oolong tea leaves undergo a crushing and fermentation process.

The problem with the tea plant is that it readily absorbs fluoride from the soil and rainwater. The heat of the boiling water causes the tea leafs to release fluoride. Fluoride is a toxic substance that when consumed in excess can have adverse effects on your body and your bones.9,10 Given that many Americans are exposed to fluoride through drinking water, toothpaste, and dental procedures, it is important to monitor outside sources of fluoride.

The health benefits of polyphenols in tea do not completely erase the deleterious effects of fluoride, but Savers know that moderation is key. Green and black tea are comparable in regards to fluoride content. However, there is mounting evidence that green tea contains many bioactive ingredients that support protection against osteoporosis.11 Some studies show that green tea contains more antioxidants than black tea.12

Loose-leaf teas tend to contain lower levels of fluoride, as do younger tea leafs such as white tea, since they do not have as much time to absorb fluoride through the roots. In all cases, moderation is recommended, so try to not drink more than three cups a day. Additionally, there are numerous herbal tea choices that contain bone-healthy flavonoids, such as chamomile, lemongrass, and others that eliminate the need to worry about fluoride.

Milk is still touted as an osteoporosis ‘savior’ by the Medical Establishment. Physicians remind patients to drink milk, and the “Got Milk?” ads worked to reinforce the false idea that milk is healthy. However, there’s clear, evidence-backed data confirming that not only does milk not do a body (and bones) good, but actually causes harm.13

The biggest irony about milk is that it actually causes bone loss, since it’s an acidifying beverage that decreases the blood pH. In an effort to compensate for the lowered pH, the powerfully alkalizing mineral, calcium, is released from bones into the bloodstream and is eventually excreted via the urine.

Some people enjoy adding milk to their tea. However, studies have shown this common practice undermines the very benefits of drinking tea in the first place. A study in the European Heart Journal found that black tea consumption significantly improved arterial function, but when milk was added to the tea, the health benefits were blunted.14 Another study examined the addition of whole milk, 2% milk, and skimmed milk to tea, and found that while the addition of any milk decreased the total antioxidant capacity of tea, skimmed milk decreased the antioxidant capacity the most.15

Milk may not be the only offender when it comes to offsetting the benefits of tea. At least one study found that the addition of soy protein also significantly reduced the bioavailability of antioxidants in green tea.16

Use unsweetened almond milk or your favorite non-dairy milk substitute, and you can add a bit of sweetness with a small amount of honey.

The Save Institute Has Always Been Ahead Of The Times!

The goal of the Osteoporosis Reversal Program is to provide you with a road map for a natural, scientifically-based treatment to reverse osteoporosis and osteopenia. The study on tea and flavonoids featured in this article is just one of many in which mainstream medicine is finally catching up with recommendations made many years ago by the Save Institute. For example, while researchers are beginning to explore the importance of antioxidants, at the Save Institute we had already devoted an entire chapter to this topic.

If you ask your friends, you will be hard-pressed to find someone who has even heard of flavonoids. In fact, most physicians or health care providers fail to mention their importance, what foods they are present in, or how they can positively impact your health. Clearly, with its reductionist mentality, the Medical Establishment fails to see how non-prescription drug options work so well to improve bone health.

At the Save Institue we believe that the systems in your body are beautifully woven together and meant to work synergistically to provide you with strong, healthy bones.

Join thousands of Savers from around the world who have reversed or prevented their bone loss naturally and scientifically with the Osteoporosis Reversal Program.
Learn More Now →

In addition to the Blueprint, the Program includes 13 supplemental bonuses that will assist you in your journey to strong, healthy bones. If you didn’t get the Program yet, you can learn more about it here.