Study: Diets High In Animal Protein Increase The Risk Of Heart Failure In Postmenopausal Women (Besides Causing Bone Loss) - Save Our Bones 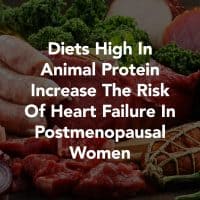 Savers know that consumption of animal protein without balancing the pH with alkalizing foods acidifies the body and causes bone loss. This happens mainly because when the plasma pH becomes chronically acid, buffering elements are depleted, and alkalizing minerals, including calcium, are utilized to rectify the imbalance.

That’s reason enough to follow the 80/20 alkalizing/acidifying dietary plan explained in the Osteoporosis Reversal Program. But there are more reasons: science has once again shown that when something is deleterious to your health, it can also damage other body systems for a multitude of reasons, in a multitude of ways – and a poorly balanced diet is no exception. Recent research now shows that a diet high in animal protein increases the risk of heart failure in postmenopausal women.

According to research presented at the American Heart Association’s Scientific Sessions in 2016, women older than 50 years old who consumed a diet high in protein from animal products — especially from meat — had an increased risk of heart failure,

From 1993 to 1998, researchers evaluated the self-reported daily diets of 103,878 women between the ages of 50 and 79. Over that time, 1,711 women developed heart failure. When the diets of the participants were compared, the women who consumed the most protein were the most likely to be among the 1,711 who suffered heart failure. Less likely to be in that group were the women who ate less protein, or got more of their protein from vegetables.1

The study subjects who ate more vegetable protein had less heart failure, although the association was not significant when adjusted for body mass.1

These findings held true regardless of race, age, level of education, and the presence of other ailments such as diabetes, anemia, or high blood pressure. This means that even if you already suffer from a condition that potentially impacts your heart health, your diet still plays a substantial role in your well being.

The research didn’t delve into the underlying mechanisms behind the association, but Barbour suggests that the high animal-protein intake could lead some people to gain excess weight. He also predicts that the same research on men would yield similar results.

This is not the first study to relate meat-eating to poor health. A series of experiments on fruit flies in the United Kingdom found that adjusting the mix of amino acids in the flies’ diets extended their lifespans. One particular amino acid, methionine, was identified as the crucial player in altering life expectancy.2

When methionine levels in the flies’ diets were reduced, their lives were extended. Prior research that showed ultra-low calorie diets extended lifespan are now understood to be the result of a reduction in methionine intake, not general caloric intake. So reducing consumption of this amino acid can have a positive impact on longevity.2

Not surprisingly, this amino acid is found mostly in meats and fish, though also in sesame seeds, Brazil nuts, and wheat germ. But this doesn’t mean you have to deny yourself foods you enjoy, in fact the researchers on this study insist that “it’s about getting the protein balance right.”2

This focus on balance is absolutely aligned with the Save Institute’s advice. We have written about the importance of choosing a diet that provides a moderate intake of methionine as an important part of achieving an 80/20 pH balanced diet.

This dietary guideline concerns the alkalizing or acidifying effect that different foods have on the body. Rather than the pH of the food before it is consumed, this nutritional guideline considers the pH of the food after it goes through the digestive process, at which time it leaves an ash residue. For example, lemons have a pH of 2, which is extremely acidic, but once they’re ingested and digested, they’re highly alkalizing.

Typical Western diets are, unfortunately, made up mostly of acidifying foods. As mentioned earlier, this causes alkalizing minerals such as calcium to be pulled from the bones to neutralize the body’s acid pH. This acidification also leads to inflammation, reduced immune function, and other harmful health issues that may manifest in unexpected ways.3

When you balance the amount of meat you consume with alkalizing foods, such as vegetables and fruits, you’re automatically reducing your intake of methionine. This reduction is tied to increased longevity, as noted above, most likely related to studies that have shown that protein restriction decreases the production of free radicals, thus reducing oxidative damage to the liver and mitochondrial DNA.4

It’s important you remember that the goal of the 80/20 diet is not to eradicate an entire class of food, but rather to balance it properly. While it’s not healthy to get too much methionine, not getting enough can be a problem because it is an essential element for the production of cysteine, which your body utilizes to synthesize glutathione, the Master Antioxidant. This chain of events makes methionine essential for the fight against oxidative damage that can hurt your bones, liver, and kidneys.

You need a healthy liver and kidney to keep your bones strong, your system detoxified and your pH balanced.

All of this adds up to a simple conclusion: the restriction of animal protein, though not necessarily the complete removal of it, is the best course of action for your bones and your overall health.

The Osteoporosis Reversal Program offers a holistic approach to bone health, and the 80/20 pH-balanced nutritional plan is one example. The Program offers comprehensive, evidence-backed steps that show you how to achieve optimal health by modifying your diet, making easy lifestyle changes, and exercising to build your bones. If you didn’t get it yet, you can learn more about the Program here.