The Many Benefits Of CoQ10 For Your Health And Bones 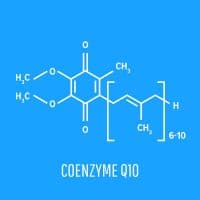 A recent study has deepened the scientific community's understanding of how and why ubiquinone (also known as coenzyme Q10 and CoQ10) helps our bodies to successfully build new bone. This is crucial information, especially for anyone who took bisphosphonates since, along with statins and beta-blockers, popular osteoporosis drugs like Fosamax, Boniva, and Reclast have been shown to reduce CoQ10 levels.

Since CoQ10 plays many important roles in the body to support overall health and bone health, it is essential to maintain good levels of this important yet under-appreciated compound.

In today's article, you'll learn about the many health benefits of CoQ10, how to keep up your CoQ10 levels within a desirable range, and how this new research can help you improve the health of your bones and your overall health.

CoQ10 is a fat-soluble compound that is a member of the quinone chemical group. The number 10 in its name refers to the 10 isoprenyl chemical subunits in its composition. This naturally-occurring compound is ubiquitous in most aerobic organisms (from bacteria to mammals), earning it the common name ubiquinone (ubiquitous quinone).

Ubiquinone is so common because it is an essential part of mitochondrial function, transporting electrons to facilitate the production ATP. ATP, or adenosine triphosphate, is the organic chemical compound that powers cellular function in all forms of life.

CoQ10 can take on three different redox states: ubiquinone, semiquinone, and ubiquinol. Redox is the chemical reaction in which molecules gain or lose electrons, respectively known as reduction (gaining an electron) and oxidation (losing an electron). This ability to give or take up to two electrons not only makes CoQ10 essential for cellular respiration and energy production but also makes it a powerful antioxidant.

The body synthesizes CoQ10 internally, utilizing amino acids and the mevalonate pathway (also called the HMG-CoA reductase pathway and isoprenoid pathway). The mevalonate pathway is essential for many cellular processes because it synthesizes essential compounds such as cholesterol, heme-A, steroid hormones, Vitamin K, in addition to ubiquinone (CoQ10). Although CoQ10 is common to all forms of life, it isn't readily absorbed from food sources, which include oily fish, organ meats, nuts, seeds, a few vegetables, and fruits (more on this later).

CoQ10 is a compound that facilitates the production of energy in the body by moving electrons. The same abilities make it a powerful antioxidant.

Given the critical importance of the work that CoQ10 performs in the body, it should come as no surprise that a deficiency of CoQ10 can cause serious and wide-ranging negative health outcomes. Many of these diseases and conditions benefit from CoQ10 supplementation, and they help paint a picture of the health benefits of CoQ10.

Proper levels of CoQ10 serve to:1

CoQ10 has wide-ranging health benefits, including reducing the risk of cancer, diabetes, cardiovascular disease, and osteoporosis.

CoQ10 And Your Bones

It isn't news that CoQ10 is important for building bone. The Save Institute has been using studies about the beneficial effects of CoQ10 and its importance for health from the very beginning.

The exact biological mechanism by which CoQ10 promotes the production of bone has been a matter of speculation, but a recent study has shed light on the interplay between CoQ10 and the cells responsible for the bone remodeling process.

The authors of the study have clarified the effect of CoQ10 on osteoblastic cell proliferation and differentiation, and its impact on osteoporosis. Osteoblasts are the cells responsible for the creation and deposition of new bone cells- they quite literally create your bones.

The researchers examined the effects of different amounts of CoQ10 on isolated rat bone marrow stromal cells (BMSCs, stem-cell-like cells that can differentiate into many types of cells, including bone cells) and in rats with induced osteoporosis. For the BMSCs they measured cell proliferation and differentiation, as well as signs of osteoblast creation. They gave the rats CoQ10 supplements at a variety of dose sizes, then they analyzed changes in bone structure and quality.3

Here is what the study concluded:

Put more simply, CoQ10 increased the number of cells that create new bone and decreased the rate at which old bone is broken down absorbed by the body. This combination of actions significantly improved the rate of bone formation, resulting in stronger bones.

A study on mice and their bone marrow cells found that CoQ10 increases the production of osteoblasts, which are responsible for forming new bone. Supplementation with the compound increased bone mass.

How To Ensure You Get Enough CoQ10

The body produces almost all of the CoQ10 it needs endogenously. That's a necessary process because you can't get an adequate quantity of the compound solely from the foods you eat, although some of your CoQ10 can and should come from a varied diet.

As we age, our bodies' production of CoQ10 becomes reduced, and that slowdown can be exacerbated by drugs like statins, beta-blockers, and bisphosphonates such as Fosamax (alendronate), Boniva (ibandronate), and Reclast (zoledronic acid).4,5 These drugs block an enzyme called farnesyl diphosphate synthase (FPPS) which is involved in the mevalonate pathway. One of the functions of FPPS is to create another enzyme: farnesyl diphosphate (FPP). This enzyme is an important catalyzer for the production of ubiquinone. For this reason, anyone who is taking or has taken one of these drugs should increase their CoQ10 levels with diet and supplementation.

Below are the foods that contain the highest levels of dietary CoQ10:

While these foods, especially the alkalizing fruits and vegetables, are an important part of any Savers diet, supplementation is necessary for maintaining CoQ10 levels. Food sources simply don't provide as much of the compound as our bodies require. As its endogenous or internal production diminishes with age or is impeded by drugs, supplementation becomes essential.

CoQ10 supplements are available in two forms, ubiquinone, and ubiquinol. Ubiquinol is the antioxidant form of the compound, making it the most usable and beneficial form of CoQ10. The Save Institute recommends a minimum daily dose of 100mg of ubiquinol from a trusted supplement manufacturer.

THE SAVE INSTITUTE RECOMMENDS:

CoQ10 is produced by the body and cannot be adequately absorbed from the diet, so supplementation is necessary to overcome the age-related reduction of CoQ10 levels.

Supplement Your Diet To Feed Your Bones

When considering overall health and bone health, no amount of supplementation can replace a healthy, pH-balanced diet. But when you have a goal as important and time-sensitive as preventing fracture, it's critical that you provide your body with every possible resource.

That's why supplementation is one of the core components of the Osteoporosis Reversal Program. The program contains all the information you need to set a course for stronger bones that includes supplementation guidelines and the science behind the recommendations.