Trying To Cut Down On Sodium? Watch Out For These 11 Hidden Sources! - Save Our Bones

Trying To Cut Down On Sodium? Watch Out For These 11 Hidden Sources! 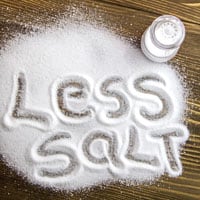 Sodium can be really sneaky. It finds its way into a wide range of foods and beverages, some of which do not even taste salty, increasing your chances of consuming too much without even knowing it.

Keeping your sodium intake in check is important if you want to reverse or prevent osteoporosis, because too much sodium, particularly in isolation, damages bone by causing calcium loss. And, as you surely know, too much sodium is detrimental to your general health as well.

So in today’s post, we’re going to shed some light on common hidden foods where sodium lurks. Prepare to be surprised!

This may come as a shock to many, but some breakfast cereals can have almost 300 mg of sodium just per one-cup serving. This may not sound like a lot, but remember, the numbers keep adding up throughout the day. So make sure you look at the list of nutrients listed on the box, or just forego breakfast cereal altogether in favor of bone-healthy smoothies, homemade granola, or plain yogurt with raw honey and fruit.

Also known as “TV dinners”, they used to come in a tin that had to be heated in the regular oven. Even though the name and method of heating have changed, these pre-prepared (most often microwavable) meals have always been and still are loaded with sodium. Some of these dinners can have more than 750mg of sodium each, and additionally, they can have many other additives and fillers that harm your bones.

I often receive e-mails from Savers who want to know about using canned vegetables in place of fresh in various recipes. The answer is not a straight-forward yes or no, because most canned veggies are preserved in cans that are lined with toxic BPA in addition to having very high sodium content. However, if you look for BPA-free cans and no- or low-sodium contents, it’s okay to use canned vegetables occasionally if you cannot get them fresh or frozen.

I’m sure you’re aware that the closer a food is to its natural state, the healthier it is. This goes for nuts, too, many of which are Foundation Foods in the Osteoporosis Reversal Program. Even acidifying nuts have a place in a bone-healthy diet because their nutrient value is so high. But when nuts of any type are roasted, cooked in unhealthy oil, and covered with salt, they lose their status as bone-building foods. Salted peanuts can contain almost 200mg of sodium per ounce – that’s around 30 peanuts, and it’s all-too-easy to consume more than 30 nuts.

Store-bought veggie “cocktails” offer quite a few vegetables in liquid form, but they do contain excessive sodium and on top of that, they’re pasteurized, so they barely contain any valuable nutrients. One cup of a typical veggie juice contains 479mg of sodium. While there are some low-sodium versions, if you want to find a bone-healthy alternative to your favorite store-bought veggie juice, you can make your own alternative with a juicer. Vegetable smoothies are also very tasty and good for your bones.

6. Sodium Goes By Other Names

As you’re checking labels in the grocery store, keep an eye out for any ingredient with the word “sodium” in it – trisodium phosphate, sodium alginate, sodium saccharin, and even the chemical symbol “Na” are used to describe ingredients that will raise the overall sodium level of the food.

It’s tempting to turn to canned soup when it’s cold outside. However, it’s best to nourish your bones with homemade soups full of nutritious Foundation Foods instead, because canned soup is packed with sodium. Conventional canned soup has anywhere from 700 to 750mg of sodium per cup, and it’s very easy to eat more than one cup at a time, especially in winter.

8. Eating Out At Restaurants

There’s nothing wrong with an occasional meal out. But make sure you watch the salt – many restaurants (especially fast food chains) rely heavily on salty fare like deli meat, frozen, prep-prepared foods, and highly-seasoned batters and coatings. So when you are dining out, don’t be afraid to ask for low-sodium options and request that the cook not add any extra salt to your food. In addition, look for items on the menu that are not as likely to contain lots of salt, such as broiled or grilled fish with a salad.

Processed, cured meats and cold cuts account for approximately 10% of the food supply in America, making this category of foods a widespread source of sodium. Much of the sodium in these cured meats comes from sodium nitrite, a carcinogenic preservative that is highly acidifying. If you do wish to have some deli meat on occasion, look for nitrite-free options or, even better, cook your own meats and slice them.

Most potato chips, pretzels, and other bagged snacks are very high in sodium, whether baked or fried. Choose energizing, bone-smart snacks instead, such as plain yogurt topped with fruits and raw nuts, or cut-up vegetables with healthful dips.

This is a pantry staple for many people, but jarred pasta sauce contains large amounts of sodium, and it’s also a source of added sugar. Just half a cup of typical spaghetti sauce has over 550mg of sodium, so look for low sodium versions or make your own pasta toppings.

Does this information seem overwhelming? Take heart , because…

Study Shows The Brain Can Learn To Prefer Healthy Foods

Scientists studied the brain activity of 13 overweight individuals. Specifically, they looked at the brains’ addiction and reward centers, areas that would show activity when participants observed pictures of unhealthy, high-sugar, high-salt foods. After six months of following a weight-loss program that emphasized healthful foods, follow-up MRIs showed a response in participants’ brains’ reward centers when they were shown pictures of low-calorie, healthful foods.1

Remarkable! Your brain can learn to respond to, say, a leafy green salad the way it used to respond to French fries or an ice cream sundae. You won’t have to struggle through those cravings once your brain learns to like the nutritious stuff.

So as you can see, it does not have to be difficult to overcome unhealthy food cravings. In fact, the Osteoporosis Reversal Program can help you beat cravings for “junk” foods, just like the dietary plan referred to in the study.

But the Program is well ahead of the Medical Establishment. While doctors rarely mention the role of nutrition in osteoporosis, the Osteoporosis Reversal Program covers all the nutritional bases and more, and it’s all backed by scientific studies.

When you follow the Program, you’ll always be ahead of the game!