How To Harness The Incredible Power Of Antioxidants In Foods 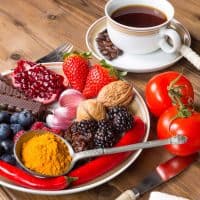 Today we're going to look at oxidation and how it can damage your bones and your health.

Fortunately, there's a simple solution to prevent this harmful process, and it's readily available. That’s because many foods that you probably have in your pantry this very moment are rich sources of powerful antioxidants.

We'll review how antioxidants protect your bones from the ravages of free radicals, and then you'll learn about a food classification system that holds the key to maximizing your antioxidant intake.

Oxidation is a chemical reaction that involves the movement of electrons. This process can create free radicals, also known as reactive oxygen species (ROS), which are unstable molecules that will steal electrons from other molecules. This electron theft damages cells, causing a variety of health problems that result from tissue damage and the subsequent inflammation it creates.

Fortunately, free radicals can be neutralized by antioxidants.

How Oxidation Impacts Your Bones

Without enough antioxidants to neutralize the free radicals in your system, the cellular damage that ROS cause builds up, resulting in inflammation and a variety of health problems.

First and foremost for Savers, oxidative stress damages bones. Indeed, in the study titled “Oxidative Stress In Bone Remodeling: Role Of Antioxidants” the authors state that:

“Changes in ROS and/or antioxidant systems seem to be involved in the pathogenesis of bone loss. ROS induce the apoptosis of osteoblasts and osteocytes, and this favours osteoclastogenesis and inhibits the mineralization and osteogenesis. Excessive osteocyte apoptosis correlates with oxidative stress causing an imbalance in favor of osteoclastogenesis which leads to increased turnover of bone remodeling and bone loss.”1

Osteoclastogenesis is part of the process of bone maintenance that removes old and damaged bone. Apoptosis, mentioned above, is cell death. ROS trigger the death of the cells that create new bone: osteoblasts (which generate new bone cells) and osteocytes (which are osteoblasts that have become bone cells).

The negative impact of oxidative stress on the process of bone production couldn't be any more direct.

Free radicals damage bone cells and osteoblasts, the cells that create new bone. Studies have confirmed that oxidative stress increases cell death among osteoblasts, which produce new bone cells. This imbalances the bone remodeling process such that more bone is removed than is created.

The research that led to this measurement system was discontinued in 2012, but we still have the data they collected. ORAC values are based on 100 grams of each food tested. That means you should consider each food differently since you are less likely to eat 100 grams of an herb in one sitting than you are of a berry.

Equipped with the knowledge of which foods are high in antioxidants you can eat a variety of those foods throughout your day. They'll add up! And unsurprisingly, many of the foods with high ORAC values are Foundation Foods. The higher the ORAC number, the more antioxidant power the food has.

These are the ORAC scores of common herbs and spices. Even though you don't eat much of each herb at a time, their high concentration of antioxidants means they pack a punch.

The National Health Institute developed a measurement system for the concentration of antioxidants in foods called ORAC (Oxygen Radical Absorbance Capacity). This research provides us with clear data about which foods provide the most antioxidants.

You have the power to increase your antioxidant levels and prevent the damage that free radicals can cause to your body and your bones. Even better, the way to get those antioxidants is by consuming a wide variety of delicious foods!

If you'd like more ideas about how to incorporate antioxidant-rich foods into your meals, check out Bone Appétit, the Save Institute's cookbook and meal planner. When you follow a pH-balanced diet, it's easy to eat foods with high ORAC values every day.