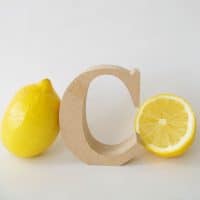 Today we’ll have a look at a three rarely discussed benefits of Vitamin C, or ascorbic acid, and examine how they improve bone health. That’s right, Vitamin C.

Most people think that Vitamin D is the only crucial vitamin for building strong bones, because they’ve fallen prey to the oversimplified understanding of our biology taught by the Medical Establishment.

So read on to get a more complete, evidence-backed picture of how this multitasking vitamin benefits your bones and your overall health.

Your adrenal glands are endocrine glands that produce a number of hormones, including adrenaline (epinephrine), as well as the steroids aldosterone and cortisol. This makes the adrenals, found just above the kidneys, essential regulators of stress and emergency response systems.

They also possess the highest concentration of Vitamin C in the human body, about 100 times greater than in blood plasma levels. As you might guess based on this fact, Vitamin C is extremely important to the function of your adrenal glands, namely in catecholamine synthesis.

In catecholamine synthesis, Vitamin C is used in the process that converts dopamine into norepinephrine. Catecholamines are organic compounds defined by the combination of a catechol– a molecule of benzene (C6H6) with two hydroxyl (OH) side groups– and a side-chain amine. Hence the name catecholamine. This molecular group includes epinephrine, norepinephrine, and dopamine.

Humans secrete vitamin C as part of the stress response when stimulated by adrenocorticotropic hormone (ACTH).1 ACTH, also called corticotropin, is produced and released by the anterior pituitary gland in response to biological stress.

It basically functions as a message that your pituitary gland, located in small saddle-like depression in the interior of your skull, sends down to your adrenal glands, telling them to produce and release cortisol. The same message causes the release of a localized flood of Vitamin C, and curiously, this flood precedes the release of cortisol.1

Cortisol, sometimes known as the stress hormone, is a steroid hormone that activates antistress and anti-inflammatory pathways. When you are under duress, the system described above kicks into gear, releasing cortisol to help you solve whatever problem has created the stress so you can return to a state of balance and calm.

Unfortunately, if this complex response doesn’t accomplish its goal, and the stress continues unabated, then cortisol levels remain high. As Savers know, this is a big problem, because the hormone has a deleterious impact on your bones, reducing bone formation in multiple ways: by stealing potassium, reducing the synthesis of collagen, and reducing the absorption of calcium through the intestines.

So why would you want to get more Vitamin C, if it’s part of such a damaging process?

If you have a sufficient levels of Vitamin C, then your stress response system will be equipped to work effectively. That means the spike in cortisol will help you meet whatever hurdle you’re facing with energy and focus, conquer it, and return to a state of balance, which includes healthy bone remodeling.

Additionally, many of the negative side-effects of cortisol are counteracted by Vitamin C: it provides support to the immune system whereas cortisol suppresses immune function; it is an antioxidant, which fights the oxidizing facets of stress hormones; and it is a building block of collagen, the production of which is slowed down by cortisol.

The end result is that Vitamin C is essential for the proper function of your adrenal glands, and the proper functioning of those glands helps regulate cortisol levels. That regulation, a movement toward balance, helps to keep your bones healthy.

Even though the connection is clear, your doctor is unlikely to take the time to explain this relationship, even if she is aware of the research.

Today’s second underappreciated benefit of Vitamin C is its outsized impact on cardiac health. Research has continued to demonstrate how this vitamin protects against endothelial dysfunction, high blood pressure, and blood vessel changes that lead to heart disease.

You may be familiar with the dangers of plaque buildup in arteries leading to heart attacks and strokes. Vitamin C plays a role in reducing the risk of this deadly buildup, which is a part of atherosclerosis, the narrowing and hardening of the arteries.

In the first stages of atherosclerosis, monocytes (a type of white blood cell) approach and stick to the walls of the endothelium (the layer of cells covering the interior of the artery walls). That causes those vessel walls to grow thicker, and less elastic. This process is known to be influenced by oxidative stress, and thus people with low levels of the antioxidant vitamin C have a higher risk of this form of cardiovascular abnormality.

British scientists proved that supplementation can reduce monocyte adhesion to endothelial cells in a randomised double-blind crossover study in which they administered 250 mg of Vitamin C per day to groups of subjects with normal and below average plasma Vitamin C concentration. After the six weeks were over, the low C group that initially had 30% greater monocyte adhesion to endothelial cells saw a 37% reduction in adhesion. They concluded that “vitamin C supplementation normalises monocyte adhesion in subjects with low plasma vitamin C.”2

Another study examined 100 patients with mild-to-moderate aortic stenosis (a degenerative heart condition), and assigned 41 of them to receive Vitamin C (1,000 mg/day) and Vitamin E (400 IU/day), 39 to receive only the C, and 20 to receive nothing, as controls. At the end of this experiment, both groups receiving supplements experienced significant reductions in levels of adhesion molecules, reducing further inflammatory damage to their heart valves.3

As these studies show, Vitamin C has a powerful impact on cardiovascular health, and much of that power seems to stem from its properties as an antioxidant.

Vitamin C Is An Antioxidant Powerhouse

Oxidation is a deadly process by which cells are damaged from inside the body. Reactive oxygen species (ROS), molecules with an unpaired electron, are unstable, and when they encounter another molecule they steal an electron from it, turning it into an ROS. This chain of events can cripple your body’s functioning in many ways, from inhibiting bone formation, to turning normal cells into cancerous cells.

Fortunately, antioxidants provide a way to decrease the number of ROS by meeting their need for an additional electron. Antioxidants have an electron to spare, and they give it freely, often without becoming a ROS themselves.

For example, in a British study researchers administered 500 mg/day of Vitamin C to 40 men and women aged 60-80 years to see the effect it had on their blood pressure and lipid profiles. The effect was amazing.

Participants systolic blood pressure lowered by an average of 2 mm Hg, and those with the highest baseline pressures saw the most improvement. Additionally, the women in the study saw a small increase in their healthy high-density lipoprotein (HDL) levels. The authors concluded that these results “contribute to the reported association between higher vitamin C intake and lower risk of cardiovascular disease and stroke.”4

As described above, the coagulation of plaque and thickening of vessel walls prevents blood pressure control, and leads to endothelial dysfunction that causes blockages due to blood clots or thrombosis. This process is due in part to the negative effects of free radical damage. Scientists have keyed into the powers of Vitamin C as an antioxidant, studying whether it can be deployed to help solve these problems.

Researchers have found that large doses of the vitamin can decrease arterial stiffness and platelet aggregation. That’s a direct benefit that makes Vitamin C a safe and viable therapy for those with cardiovascular disease, and an essential supplement for prevention.

Other studies have looked at how Vitamin C can reduce atherosclerosis risk factors like the intima-media thickness (IMT) of the carotid arteries which supply blood to the brain. By decreasing the rate of IMT increase over time, participants chances of a stroke were significantly reduced. Those who were already at risk saw the greatest benefits. So especially if your vitamin C intake is currently low, or your cardiovascular health is suffering, Vitamin C is a game-changer.

Vitamin C is a potent antioxidant that protects you from those free radicals. British scientists showed this in a study analyzing the impact of two weeks of Vitamin C supplementation on the recovery from an unusually intense bout of exercise. Men were put into supplemented and unsupplemented groups for two weeks, then asked to perform a 90-minute-long run. The group that had been taking vitamin C experienced less muscle soreness, better muscle function, and lower levels of oxidative molecules in their blood.5 Other studies have shown that vitamin C protects against protein oxidation that occurs during exercise.6

Vitamin C has even been shown to reduce muscle soreness, and reduce the release of creatine kinase, which indicates muscle damage.7 That means this vitamin can make your bone-building workouts more enjoyable, and more consistent!! No one wants to be sore the next day, and no one wants their antioxidant levels to be depleted by a workout. Supplementing with vitamin C solves both of these problems!7

It’s easy and delicious to get Vitamin C from foods, and it’s essential for the health of your whole body– including your bones. Through improvement of your cardiovascular system, creation of collagen, protection against stress and cortisol, and providing antioxidation throughout your body, Vitamin C is a bone health champion. That’s why it’s one of the Foundation Supplements listed and explained in the Osteoporosis Reversal Program.

Try boosting these vitamin C rich foods in your diet, all of which are Foundation Foods:

In addition, at the Save Institute we recommend taking a minimum of 500 mg per day. Unlike other species, humans are unable to synthesize vitamin C, so we must be certain that we get enough from external sources. While there are many great food sources, the studies above have proven that a supplement can ensure you get the full benefits of this micronutrient.

Maybe you’ve never heard about the bone-building powers and other overlooked benefits of vitamin C. That’s the sort of information the Medical Establishment is failing to provide. And it’s one of the reasons the Save Institute is determined to spread this knowledge.

You see, the Medical Establishment is stuck in a reductionist view of health that robs people of valuable tools and practices. Our bodies are far more complicated than science has yet been able to fully describe, and yet a large contingent of medical professionals insist on treating the systems that keep us alive as if they were simple machines: adjustable with dangerous drugs, influenced by only the most obvious mechanisms.

In reality, all of our body systems are interconnected and impacted by almost everything we do, consume, and experience. Instead of shying away from this complexity, the Save Institute advocates for learning about the wonders of the human body, and approaching health holistically to make positive changes across the full spectrum of your daily life.

You can read more about vitamin C, the Foundation Supplements, and much more in the Osteoporosis Reversal Program. Of course it covers vitamin D and calcium (and in ways you might not expect!), but it also explains the science behind the rest of the nutrients your body needs to build and maintain healthy bones and excellent health.