Reductionism Vs. Holism: What They Mean And Which Is Better For Your Bones And Your Health? - Save Our Bones

Reductionism Vs. Holism: What They Mean And Which Is Better For Your Bones And Your Health? 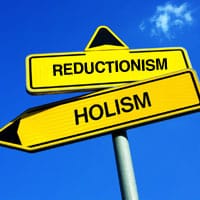 There is a battle raging in the fields of medicine and biology. It’s been going on for more than a hundred years, and probably even longer. It’s not a disagreement over how things work or why, but over the best way to make physical changes to the biological systems that keep us healthy and happy.

Today I’m going to strap on my shiniest science armor and jump into the middle of the fight to help you understand this conflict and how it impacts your bone health.

Systems Biology posits that organisms (including humans!) are a combination of many systems, each of which are combinations of yet smaller systems, and so on and so on.

Even non-biologists use the language of “systems” to describe many of our body’s functions. We have a circulatory system, a respiratory system and extra-important for us a skeletal system. That seems obvious enough, but the way we think about these systems – both their individual functioning and their relationships to each other – can have a big impact on them.

Are We More Than The Sum Of Our Parts?

There are two warring schools of thought about how to best understand these systems: Reductionism and Holism. Both camps, in a medical context, intend to create healthier humans, but their different approaches to understanding and considering the human body lead to vastly different attempts… and results.

Before we get into the details, it’s worth noting that these two groups aren’t actually unified or even very well defined. There are plenty of nuances within each philosophy that result in very different opinions and practices, and individual biologists often fall somewhere on a spectrum between the two.

Reductionism asserts that we can best understand an organism by reducing it to its component parts. This position sees the human body as a massive collection of very simple systems. Reductionists apply that concept to argue that problems can and should be fixed by isolating the smallest possible system and adjusting it. The reductionist views the human body as a mechanism contained within smaller mechanisms, down to the molecular level and beyond. The Medical Establishment and Big Pharma apply the reductionist view.

Holism views an organism by considering the relationship of its complete systems to its whole. This position sees the human body as a collection of systems that are best understood by their impact on and relationship to each other and to the whole body. Holists argue that problems can and should be fixed by examining all of the systems that relate to the problem, and then adjusting them each with a consciousness of how each adjustment affects the whole.

Holists are often defined simply by their objection to reductionism. Some Holists observe that we cannot reduce certain biological systems because they are so complex that predicting their behavior is beyond the computational processing power available to us.

Others contend that reductionists are so focused on the minutiae of each individual biological system, that they fail to account for the health and functionality of the whole. These holists might employ a favorite idiom to describe reductionists: they can’t see the forest for the trees.

Approaching From The Inside Out? Or The Outside In?

Systems Biology, as a field of study, naturally encompasses both reductionism and holism, and certainly both are interested in biological systems. The important questions defining these two ends of the spectrum are ones of scale and inclusion. Do you zero in on the tiniest possible system and try to tinker with one variable in the base equation to get a new result? Or do you make natural adjustments to all related systems while considering and prioritizing the whole?

By now you have probably surmised where Savers fall on the spectrum. At the Save Institute, we always apply a holistic method: considering the whole body to achieve and maintain good health, including your bones.

You probably saw a bunch of skeletons running around your neighborhood last week during Halloween. Some may even have knocked on your door! If you’re just a skeletal system, then giant pharmaceutical companies and the doctors who do their bidding probably have everything you need to keep trick-or-treating in the land of the living.

But if you have a whole body, you probably want to take care of all of it. When you do, you can grow stronger, younger bones without compromising the rest of your health.

To better understand the specific differences between reductionist and holistic approaches to bone health, let’s take a look down the dark road that extreme reductionism has lead drug companies.

How has reductionism lead to the prevalence of potentially dangerous drugs like Fosamax, Boniva, and other biophosphonates?

Remember that reductionism posits that every problem can be solved by isolating the base equation and then adjusting the variables. The relevant base equation for building bone mass is bone remodeling, the process of bone resorption by osteoclasts and new bone formation by osteoblasts, the essential out-with-the-old and in-with-the-new system by which we keep our bones young.

The reductionist solution is to use bisphosphonates or other osteoporosis drugs, to prevent osteoclasts from doing their job: removing old worn-out bone tissue to make way for the new bone that osteoblasts build. As the old bone gets buried beneath the new (instead of being replaced) the quantity of bone increases, so the reductionists feel like they’ve solved the problem.

Focusing on just increasing bone quantity shouldn’t be the goal. Instead, the goal is to avoid fractures while living your life at its fullest. That goal is met by increasing bone quality first and by not tampering with the remodeling process, but rather, by applying easy nutritional and lifestyle guidelines, which in turn, typically also lead to an increase in bone density.

I like the metaphor of a thick but dried-up tree branch compared to a pliable young twig. Bones that have been built up with osteoporosis prescription drugs might get thicker (at least for a while) like the brittle branch, but just like that branch, they are easier to break than a resilient twig, which can bend without breaking.

Recent studies have backed up this common sense comparison1 and you can read more about how bone heterogeneity prevents atypical femur fractures in my article, “More Scientific Proof That Bisphosphonates Destroy Bone And Cause Atypical Fractures.”

Not only has this reductionist solution dangerously tinkered with the innermost natural workings of the human body, but it has absolutely zero regard for any of the other systems that make up your whole.

The side effects of bisphosphonates wreak havoc on your body. For those following a reductionist approach, creating a greater quantity of bone might seem like a job-well-done, because all they care about is the system they’re adjusting. But what if that adjustment destroys the systems around it? This sort of tunnel vision might be great for Big Pharma, but it’s clearly detrimental to your health.

Here’s the list of drug warnings I included in my fantasy Boniva commercial where Sally Field tells the troubling truth about this drug:

“If you are looking for a short-term osteoporosis ‘quick-fix’ and still want to take a chance with Boniva, please note that you are risking the following side effects, many of which may be irreversible: nausea, abdominal pain, flatulence, diarrhea, severe constipation, inflammation and ulceration of the esophagus, chest pain, heartburn, difficulty swallowing, skin rash, eye problems including vision loss and blurred vision, generalized pain of the muscles, joints, and/or bones, decreased mobility of joints, blood clotting disorders, anemia, dental problems, numbness, tight muscles in the face, seizures, irritability and unusual thoughts and behaviors, altered taste, atrial fibrillation, jaw pain, osteonecrosis of the jaw.”

As mentioned earlier, the pharmaceutical industry is built on reductionism: attempting to reduce the human body to a simple enough equation that they can just switch out a few variables to get the desired result.

Unfortunately, when this goes wrong, as it most often does, it goes very wrong, so don’t count on the FDA to protect you. There have been 35 drugs approved by the FDA that were later pulled from the market (sometimes after a shockingly long time)2 when they were finally deemed too dangerous for human use. Many drugs currently on the market are ongoing candidates for recall. So it should be no surprise that even non-biphosphonate drugs claiming to reverse osteoporosis work in a similarly short-sighted way. Prolia for example isn’t a biophosphonate, but it’s still trying shut down your normal bone replenishing system by taking osteoclasts out of the equation.

Read more about the comparable dangers of Prolia in a previous post, where I reimagine a Prolia commercial. Prolia’s side effects extend to the immune system, with disturbing results. That’s another example of the dangerous reductionist tunnel vision.

A Holist would never advocate for a solution that causes more problems. That’s because holism is concerned with the well-being of the entire body, and how all of its systems work together.

Fortunately, when you zoom out and start considering whole systems of the body and how they work together, new solutions arise. Instead of shutting down those hard working osteoclasts that are trying to do their job, we should support every part of our skeletal system to help us grow newer, younger bones. Instead of zooming all the way in to solve the problem with one molecular quick-fix, we can create positive change.

Value your whole self. Give your bones what they need to rejuvenate by consuming a pH-balanced diet. Help your bones to grow strong in all the right places through simple and specific weight bearing exercises. Make simple changes to your lifestyle to help you live the bone-healthy life you want.

The Osteoporosis Reversal Program approaches bone health from all of these angles; a multi-prong approach that activates the systems your body already have in place to keep your bones young while valuing and caring for the whole you.