Update: The 2022 Dirty Dozen And Clean Fifteen List - Save Our Bones 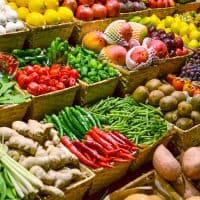 The Environmental Working Group has released its yearly list of the twelve fruits and vegetables that carry the largest amount and variety of residual pesticides.

It also published its list of the 15 produce items that bore the least chemical residue. Today we'll review the lists.

Then we'll take a closer look at bone-damaging pesticides commonly found on foods– even after washing. You'll learn how to avoid the chemicals and why doing so supports your bone health and overall wellness.

The USDA conducts routine testing on both conventionally and organically grown fruits and vegetables to assess how much and what kind of pesticide residue is found in the food eaten by consumers.

The USDA washes and peels the fruits and vegetables before testing, just like people do at home before eating them. Then the EWG analyzes the results for each type of produce and ranks them based on six factors:

The EWG researchers weighted the factors evenly. The foods with the worst scores had the largest volume and widest variety of pesticides.

This year's lists are based on 44,702 samples of 46 common fruits and vegetables. The 12 worst offenders made it onto the Dirty Dozen. The 15 foods with the lowest amount or fewest varieties of pesticides comprise the Clean Fifteen.

The Environmental Working Group analyzed data gathered by the United States Department of Agriculture to determine which 12 fruits and vegetables contain the highest volume and largest variety of chemical pesticides. They also published a list of the fruits and vegetables with the least amount of pesticide residue. These are the Dirty Dozen and Clean Fifteen.

The Dirty Dozen And The Clean Fifteen

Overall, the EWG found that more than 70% of conventionally grown fresh produce sold in the United States contained pesticide residue.1 That's reason enough to choose organic. But not every food had the same amount and variety of pesticide residue.

The EWG lists the following 12 foods that pose the largest risk of pesticide ingestion of all the produce items tested by the USDA. Once again, strawberries top the list as the most pesticide-laden fruit.

The Clean 15 are the fruits and vegetables that had the lowest amount and smallest variety of pesticides after washing and peeling. You'll notice that the foods on this list tend to have a thick peel that is removed before eating.

Use these lists to make smart shopping decisions. If your shopping budget won't permit you to buy all organic produce, then prioritize foods on the Dirty Dozen list to buy organic. Or if you find yourself without organic options, choose conventionally grown foods from the Clean Fifteen to avoid pesticide exposure.

More than 70% of the tested produce contained pesticide residue. The worst offenders were strawberries, topping the dirty dozen list again this year. The “cleanest” crop was avocados. See the two lists above, and use them to make shopping choices in the event that you can't buy organic produce.

Get These Pesticides Off Your Plate

Conventionally grown foods harbor a shocking number of different pesticides. The EWG found that a single sample of kale, collard, and mustard greens had up to 21 pesticides, and across different samples, there were more than 100.1

Here are three examples of the damaging synthetic chemicals that Big Agriculture uses on the fruits and vegetables they sell to consumers.

The specific health risks of each of these three pesticides are plenty of reasons to avoid them. But for Savers, there is another destructive trait shared by all three. In fact, all chemical pesticides share this destructive power: they're acidifying chemicals that burden your body's filtration system.

One of the great benefits of fruits and vegetables is that they're almost universally alkalizing. But that benefit is undermined by the potently acidifying synthetic chemicals lacing conventionally grown produce.

Additionally, these chemicals are synthetic toxins that must be filtered from your body by your liver. This means that your liver is expending resources to clear out pesticides from your body instead of managing the myriad other tasks it needs to do– including supporting the health of your bones.

Among the hundreds of pesticides in use are DCPA, glyphosate, and carbamate. They've been linked to diabetes, cancer, Parkinson's, Alzheimer's, and more. All of them are acidifying, and they place an additional burden on the liver.

You now have the information you need to avoid acidifying toxic pesticide residue. Choose organic produce whenever you can, especially for the 12 foods on the Dirty Dozen list.

Choosing organic foods is one of the many small steps that Savers can take to combat osteoporosis and build stronger bones. The Osteoporosis Reversal Program offers a comprehensive set of simple and effective choices that add up to big improvements in bone health.

But in spite of our best efforts, the modern world exposes us to toxic chemicals– whether it's through food, air, water, or products we use or handle every day. You can give your body a break from the toxins and a chance to replenish its ability to filter them using OsteoCleanse.

OseoCleanse is an easy and rejuvenating six-step week-long cleanse designed to flush your body of harmful chemicals and toxic compounds setting the stage for restoring the health of your bones through the Osteoporosis Reversal Program. And if you’ve taken any of the commonly prescribed (and extremely harmful) osteoporosis drugs, OsteoCleanse can help to flush them out of your system.

OsteoCleanse is the ideal compliment if you’re following the Osteoporosis Reversal Program, providing you with an enormous head-start on your natural bone health journey. But even if you’re not following the Program, OsteoCleanse will help your body achieve a state that promotes optimum health by protecting your liver and kidney function.

And to make things even easier for you, you’ll get over 40 delicious cleansing recipes you can use during the process, along with the shopping list. If you don’t feel increased energy and improved health after you follow OsteoCleanse for seven days, simply contact Customer Service and you’ll get a full refund, no questions asked.

So keep making the best choices for your bones and your wellbeing– the good results are on their way!