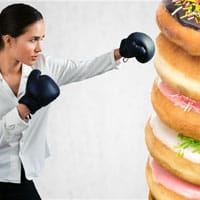 Many of you are familiar with bone-healthy foods that reduce cortisol and decrease the symptoms of stress and anxiety. But did you know that some eating habits and foods do exactly the opposite?

So to raise your awareness on this issue, I’m thrilled to share with you today seven eating habits and foods that you’ll want to avoid not only for your bone health, but for your emotional health as well.

7 Eating Habits To Avoid – And What To Do Instead

It’s easy to miss meals if you’re in a hurry or distracted, especially breakfast. While missing one now and then isn’t bad, if meal-skipping becomes a habit, it habitually destabilizes your blood sugar and sets the stage for moodiness, irritability, and anxiety.

Missing a meal also means you’re missing an opportunity to balance your pH and strengthen your bones with nutritious foods.

So instead of skipping a meal, try planning ahead. If you have the Osteoporosis Reversal Program, then you have the tools you need to plan bone-smart meals and snacks so you won’t be tempted to skip.

Also, make a point to include some bone-healthy protein in your meals, so you can spread your protein intake throughout the day. This helps keep blood sugar stable and prevents muscle deterioration associated with age.

Highly-processed, packaged foods are low in nutritive value and high in sodium, sugar, and more often than not, synthetic chemicals and food additives. In addition, bone-damaging hydrogenated oils are often used in fried and packaged foods.

Fried foods may also contain a toxin called acrylamide, which is produced when foods (especially potatoes) are exposed to high temperatures associated with deep frying. The high frying temperatures also produce lipid peroxides – basically, rancid fats – that damage the liver. A functional liver is paramount in bone health, because it is your primary detoxification organ.

And fried foods contribute to depression. In a 2009 data analysis, researchers reviewed data from 3,486 study participants with a mean age of 55.6 years. Individuals who ate a whole-food diet like the one described in the Program, rich in fruits and vegetables, had a much lower risk for depression than those who ate a refined, processed diet heavy with fried foods.

“…a processed food dietary pattern is a risk factor for CES–D depression 5 years later, whereas a whole food pattern is protective.”1

This is why it makes sense to prepare your own bone-healthy meals at home as much as possible in order to avoid these kinds of foods. Of course, it’s not “forbidden” to eat out now and then; just not every day.

If you’re following the pH-balanced nutritional plan described in the Osteoporosis Reversal Program, then you know that grains in general are not emphasized. But grains are not off-limits, either, and many of them contain bone-building nutrients. So when you do eat grain-based foods (such as pasta) as part of your bone-nourishing diet, make sure you’re eating a variety of whole grains rather than refined ones, and here’s why.

“White” foods like pastries, cakes, commercial white bread, etc. act much like sugar in the body. We’re going to talk about sugar in more depth in a moment, but for now the point is that refined grains are like sugar in that they are simple carbohydrates.

They’re stripped of their natural nutrients during the refining process, rendering them low in fiber, healthful fats, vitamins, and minerals. They are absorbed quickly into the bloodstream, contributing to blood sugar spikes and crashes, which can have quite a negative impact on your bones and your mood. And of course, refined grains do not contain nutrients that build bone and are involved in the homocysteine pathway, such as B6, B9, and B12. These nutrients are important in keeping depression at bay.

In addition to skewing blood sugar levels, eating too much refined sugar (including corn syrup) can lead to additional sugar cravings – a cycle that can be hard to break. And if you continue in this cycle and indulge in lots of sugar, your bones will pay a heavy price. Sugar is not only inflammatory; it contributes to the bone-damaging blood-sugar imbalances mentioned in #3 above, and it taxes the liver and kidneys.

You may be wondering how much is “too much” sugar. The Program does not advocate exact amounts or “cookie cutter” recommendations; instead, use common sense and be mindful of what you eat. This is where the 80/20 guidelines come in handy – if you’re eating dessert after every meal and snacking on sweet foods in between meals, that’s very likely more than 20% of your acidifying food intake for the day. So enjoy a sugary treat now and then, but simply cut back so you’re not eating sugar often throughout the day.

The coffee habit is a common one. Its caffeine content provides an energy boost, augmented by large amounts of sugar, flavored syrups, or sweetened commercial creamers. But all that energy is just an illusion; the stimulant effects of caffeine are temporary, and can leave you feeling more tired. What’s more, caffeine too late in the day can keep you awake at night, contributing to exhaustion that makes you want more to stay awake the next day.

Caffeine is a known contributor to feelings of tension and anxiety, and is contraindicated for people with anxiety disorder and other psychiatric conditions. A comprehensive analysis from 2011, which includes decades of data, reveals the neurological effects of this ubiquitous stimulant.

“The neurophysiological health disadvantages of caffeine include anxiety and panic attacks… In addition to this caffeine may impair learning and memory.”2

Caffeine poses other health threats. In addition to interfering with sleep, which is necessary for optimal bone health, caffeine greatly increases the likelihood of kidney stones and renal failure.

Please don’t misunderstand – coffee is not a “bad” beverage even though it is acidifying. It actually contains some bone-healthy polyphenols and antioxidants that make it perfectly acceptable on a pH-balanced diet. The key is, as always, moderation – it’s not a good idea to drink coffee all day long, for instance. One or two cups a day, preferably in the morning, is more like it.

6. Relying On Alcohol To Relax

If you struggle with anxiety and stress, drinking alcohol may seem like a way to unwind. Of course, there is nothing wrong with alcohol in moderation, and in fact, beer and wine have some bone-healthy benefits. For example, beer is high in the Foundation Supplement silicon, and wine offers bone-building resveratrol.

However, no alcoholic beverage should be consumed as a primary source of these nutrients. There are many Foundation Foods that are high in silicon and others that are rich in resveratrol, and they do not have the unhealthy side effects that alcohol does.

For instance, alcohol blocks an important neurotransmitter, serotonin, setting the stage for greater anxiety after the alcohol wears off. In addition, looking to alcohol to relax you or calm you down can set the stage for unhealthy dependence.

And finally, alcohol is acidifying, so you need to account for that in your bone-healthy diet (an occasional glass of wine or beer is fine, as mentioned earlier).

Instead, try a calming cup of chamomile tea in the evenings. It’s not only calming and sleep-promoting; chamomile is good for your bones, too.

Classic “junk foods” like nachos and potato chips tend to be a go-to food during times of stress, anxiety, or depression; but with few exceptions, they are high in sodium, which can harm your bones and increase anxiety in a variety of ways.

Table salt consists of sodium and chloride; nothing else. Consuming it in isolation skews important mineral and electrolyte balance in the body, and promotes metabolic acidosis which leads to loss of bone density. Sodium depletes calcium from the bones, too – studies have shown that the more sodium that is consumed, the more calcium is excreted in the urine.

It’s this competition with potassium that connects sodium consumption to anxiety and depression. Potassium is an important electrolyte required for the nervous system to function properly. In a 2008 study published in the British Journal of Nutrition, a low-sodium, high-potassium diet improved depression, tension and overall “mood states” in 38 women and 56 men with a mean age of 56.3.

“In conclusion, a LNAHK [low-sodium, high-potassium] diet appeared to have a positive effect on overall mood.”3

So by consuming excessive sodium, you’re depleting your body’s available potassium, contributing to depression, anxiety, and an overall bad mood.

On the contrary, “whole” salts like sea salt, pink Himalayan salt, and other unrefined salts include many minerals and components besides simply sodium and chloride. Of course, these salts should also be used in moderation; but by simply avoiding processed, fried foods as discussed above and preparing more meals at home using unrefined salt to taste, you’ll likely have your sodium intake in check.

I’d like to end on a positive “do” to offset what you may have perceived as “don’ts” I shared above. If you are struggling with insomnia, anxiety, tension, stress, or any similar issue, here’s a delicious, bone-building recipe that calms the nerves and eases stress.

Lavender has been used to tame tension and promote sleep for centuries. It comes together with bone-healthy, alkalizing lemons in this recipe.

The preparation is simple – simply mix all ingredients together in a pitcher, chill, and serve over ice. Here’s a tip for dissolving the honey: place the honey in the pitcher first, and then slowly stir in the water ¼ cup at a time until the honey is liquefied; then add the rest of the water.

Lavender has long been used for treating headaches and other issues, especially insomnia and anxiety. Lavender pillows to promote sound sleep, with the dried flowers sewn right in to the pillow, have been around for centuries. Topical use of lavender essential oil is also beneficial.

And unlike prescription sleeping pills, which not only damage bones but also carry a host of dangerous side effects (including the potential for addiction), lavender is extremely safe. According to recent research, a compound for oral consumption has been found to be just as effective as Lorazepam, a psychoactive drug that’s part of a popular class of pharmaceuticals called benzodiazepines.4

That’s great news for anyone wishing to build bone strength and overcome anxiety! In fact, the Osteoporosis Reversal Program helps you overcome anxiety and depression in all kinds of ways. Not only do many Foundation Foods contain stress-busting, cortisol-lowering components, but the entire philosophy of the Program relieves fear and anxiety.

One of the first things you’ll read in your copy of the Osteoporosis Reversal Program is that osteoporosis is not a disease. That already helps alleviate the anxious fear that can accompany an osteoporosis or osteopenia diagnosis (I know it did for me). Once you realize that low bone density is simply a matter of imbalance, and that you can bring your body back into balance with simple lifestyle and dietary changes, it frees you from the diagnosis of a disease and puts you in control of your health.

You can change your bone health for the better! Many thousands of Savers have done so, and so can you.