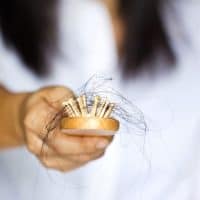 Have you been noticing more hair than usual in your shower drain or hairbrush? If so, you are not alone. It is estimated that 35 million men and 21 million women suffer from hair loss, medically referred to as alopecia.

You may know that alopecia is an expected aspect of the aging process, influenced in part by your genetics. While hair loss is undoubtedly impacted by your genes and age, there is so much more to the story. Stress, nutritional deficiencies, and sleep (or lack thereof) play a significant role in the strength of your hair.

What you may not have been told is that many popular osteoporosis medications also contribute to hair loss. At the Save Institute we never recommend to rely on these dangerous drugs, and instead, we show you how to fuel your body with nutrient-dense foods that reduce bone loss and hair loss.

Today we share with you the top seven Foundation Foods that you should incorporate into your diet to keep your hair looking healthy and full and your bones resistant to fracture.

The Biology Of Human Hair

As much as we all know that beauty is derived from the inside, hair plays a vital role in one’s appearance and self-confidence. In addition to serving the aesthetic function of adding uniqueness to your look, the hair on your head helps your body to regulate temperature, providing both heat insulation and cooling mechanisms. It also protects from the dangers of too much sun.

Aside from the bone marrow, hair is the fastest growing tissue in the human body, with the cells dividing every 23 to 72 hours. The speed of hair growth depends on several factors including age, gender, hormones, and as mentioned earlier, genetics. It is also impacted by the availability of nutrients and access to oxygen.

The living part of the hair, or the follicle, is found underneath the skin where it derives its nutrients from the papilla, which contains blood capillaries that nourish the follicle. On average, the human head has approximately 150,000 hair follicles, which cycle through four distinct phases: anagen (the growing phase), catagen (the regression phase), telogen (the resting phase), and exogen (the shedding phase). At any given time 80 to 90% of hair is in the anagen, or growing phase, while the rest of the hair cycles through the other phases. As we age, the length of the anagen phase naturally decreases, leaving our hair vulnerable to breakage and thinning.

When the body experiences stress in any form, be it a nutritional deficiency, illness, sleep deficits, or emotional stress, it re-prioritizes the essential functions. As such, the vital organs are attended to first, since the hair follicles are less of a priority. As a result, the follicles may not receive an adequate supply of oxygen and nutrients.

The Devastating Effects Of Sugar On Hair Loss

Since Mainstream Medicine blatantly tends to ignore nutrition, your doctor may have never told you that what you eat can affect hair loss. But, as you’ll see below, science does confirm this.

A groundbreaking Finnish study conducted in the year 2000 revealed that men with insulin resistance were more likely to be bald.2 In 2003, the same Finnish researchers conducted another study on women. They concluded that women with some markers of insulin resistance faced significantly increased risk of hair loss.3 A 2014 study further confirmed these findings, establishing that metabolic syndrome is associated with early onset alopecia.4 A common cause of insulin resistance is a diet with excessive consumption of simple carbohydrates and refined sugars.

Could Medications Cause Hair Loss?

Oftentimes, hair loss is a side effect of medications. From antidepressants to blood pressure drugs, synthetically-made drugs can lead to temporary hair loss or permanent baldness.

In fact, research has shown that bisphosphonates, the most popular osteoporosis drugs, such as Fosamax, Boniva, and Actonel, are linked to alopecia.5 While the exact mechanism is unclear, scientists believe that bisphosphonates interfere with an enzymatic pathway.

Foundation Foods That Stop Hair Loss In Its Tracks

Science has established that multiple nutrient deficiencies result in hair loss. The foods listed in today’s article contain those vital nutrients, many of which are Foundation Supplements in the Osteoporosis Reversal Program.6

Below are seven foods that you should consider adding to your diet on a regular basis to boost the health of your hair and prevent further hair loss. You may be surprised to learn that some are acidifying foods. Remember, as long as you adhere to the 80/20 pH balanced nutritional plan, you can consume those foods.

Barley is one of the oldest grains in the world, and although acidifying, barley has impressive health benefits. It is rich in iron and copper, two minerals essential for the production of red blood cells and hemoglobin. Hemoglobin carries oxygen throughout the body, delivering much-needed nutrients to the hair follicle. A lack of adequate iron in the body can lead to anemia, which has been shown to be a major contributing factor in hair loss.7

Further, barley is rich in the powerful antioxidant, Vitamin E. Tocotrienols are members of the Vitamin E family that protect skin cells, as well as repair sun damage to the scalp. Generally speaking, patients with alopecia exhibit lower levels of antioxidants in their scalp area. In one randomized study, 21 volunteers received oral tocotrienols while 17 others received a placebo. At the end of 8 months, those individuals who received the tocotrienol supplementation had a 34.5% increase in the number of hairs on the head.8

Eggs are a nutritional powerhouse, containing several vitamins and minerals that are essential for healthy hair. They are an excellent source of Vitamin B complex, including the Foundation Supplement biotin. Sometimes called Vitamin H, biotin works synergistically with the B-complex vitamins to help metabolize proteins. Biotin keeps the skin supple and moist, and a deficiency leads to flaky and irritated skin, including on the scalp.

Scientific data confirms that a deficiency in the essential mineral zinc contributes to the development of alopecia. Meat, including lamb, beef, and turkey, all contain excellent levels of this mineral.

In a study conducted in the year 2013, scientists examined the zinc and copper levels of 312 men and women experiencing hair loss. The researchers found that those subjects with alopecia had significantly lower serum zinc levels.10 Three years later, another study reiterated these findings. Researchers compared 50 people with alopecia with 50 healthy controls and found that all of the individuals suffering from hair loss had significantly lower zinc levels.11

Although most nuts and seeds are acidifying, they provide several nutrients that are important for healthy hair growth. Nuts, such as walnuts, are a rich source of Omega-3 and Omega-6 fatty acids, as well as antioxidants, which have all been shown to have positive effects on hair.

In fact, a 2015 study found that the supplementation of Omega-3 and Omega-6 fatty acids, as well as Vitamin C, E, and lycopene, not only prevented hair loss in women but improved the thickness of their hair as well. After six months of supplementation, nearly 90% of the women reported that their overall hair loss had decreased.12 Further, the majority of the women said that their hair was shinier, softer, and had more volume.

To replicate these results, you can increase your consumption of foods high in omega fatty acids, such as walnuts, pine nuts, and seeds. They contain oils that will also help add to the amount of elastin in your hair.

Because of its anti-inflammatory Omega-3 fatty acids content, salmon is an excellent addition to your diet if you are trying to ward off hair loss. Your hair is a protein fiber, and as such, requires protein to grow new hair and keep the existing ones strong and healthy. Protein is also necessary to produce keratin, a key component of hair. Salmon is an excellent source of protein. Further, the fatty acids present in the fish add to the moisturization of your scalp.

Salmon also contains Vitamin D, which as noted above, is essential for hair growth. Further, salmon helps the body process insulin. Since insulin resistance is linked to alopecia, salmon is an essential addition to your diet.

This leafy green is vital for your hair. Spinach is rich in both folate and iron. Folate aids in the production of red blood cells and iron helps the red blood cells carry oxygen. Since spinach is also a good source of Vitamin C, it helps aid in iron absorption. The Vitamin C in spinach also fights oxidative stress that leads to hair graying and loss.13

In addition, spinach provides good amounts of Vitamin A, which aids in the growth of all body tissues, including skin and hair. Vitamin A is also required for sebum production. Sebum acts a natural conditioner to keep hair moisturized.

If you’re not eating spinach because of its oxalate content, you only need to worry about it if you’ve had kidney stones in the past. While oxalates do not leach calcium from the bones, laboratory studies have shown that oxalates may interfere with calcium absorption. However, the reduction is relatively small and should not prevent you from eating spinach, which contains many valuable nutrients.

The presence of beta-carotene is what makes sweet potatoes an ideal addition for the prevention of hair loss. Beta-carotene gets converted into Vitamin A, which promotes the growth of healthy cells and tissues, including hair. Diets that are deficient in Vitamin A can contribute to several health problems, including hair loss.14

Sweet potatoes are an excellent source of Vitamin A, and there are other foods that contain this nutrient including carrots, butternut squash, and peppers.

An Integrative Approach To Health Is Essential

Savers know that there are no quick-fix approaches to any health problem, including the loss of bone or hair. But the good news is that many of the answers you are seeking are available right in your own kitchen.

The Save Institute believes that healing must be viewed through a holistic lens, and this is reflected in the Osteoporosis Reversal Program. When you follow the Program, you are building your bones, and you are also contributing to the health of many other biological processes, helping you to improve your health and the quality of your life.