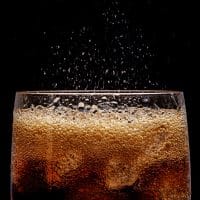 Today we’re going to have a thorough look at a pervasive bone and general health-damaging habit: drinking soda. Give this article a read, and if you’re still drinking it, see if it doesn’t provide the motivation to put down the pop and start reclaiming your healthiest self.

Soda damages many systems of the body, including the skeletal system. Savers are keenly aware that soda causes direct damages to bone, but it’s likely that some of the facts you’ll discover in this article will surprise you.

Of course different sodas contain a few varying minor ingredients that account for their differing flavors and colors, but all sodas are composed almost entirely of carbonated water and corn syrup (or another sweetener). These beverages are quite literally sugar-water, infused with carbon dioxide to give them their fizz.

How much sugar? A can of Coca Cola has 39g, which equates to about nine and a half sugar cubes. Some sodas have even more: a can of Mountain Dew has 46g. In the United States, this sugar comes in a particularly nasty form: high fructose corn syrup (HFCS). In fact almost ten percent of a can of cola is HFCS (more about this insidious sweetener later).

Then there’s carbonated water, and about 1% is phosphoric and citric acids, which create the acidic twang to these drinks. Citric acid is found naturally in many fruits, but phosphoric acid is an artificial preservative.

Cola typically contains caffeine, caramel color and a mixture of ingredients listed only as mysterious “natural flavors”. So what does this cocktail of sugar-cured acids, caffeine, and secret ingredients do to your bones and your body? Let’s take a look.

A can of Coke stuffs in 140 empty calories. A 20oz bottle contains 240. These calories are not attached to anything valuable at all whatsoever. Meaning these extra, useless calories are increasing your daily intake without offering any benefit, and unless you’re managing to quickly burn them all off with extra exercise, are being stored in your body as fat.

A study published in the New England Journal of Medicine in 2011 looked at 120,000 men and women’s dietary habits and found that those who increased their sugary drink consumption by a soda-can’s worth per day gained more weight over time than those who didn’t. The average additional weight gain was an extra pound every four years.1

For those who are already in need of weight loss, soda can be holding back attempts to slim down. A study that looked at overweight adults found that replacing high-calorie beverages with water or low-calorie drinks resulted in weight loss of 2%-2.5%. Those who made the switch were twice as likely to achieve a 5% weight loss.2 If you weigh 200 pounds, that’s ten pounds, just from giving up soda.

If you think you’re excluded from this risk because you drink diet soda, I’m sorry to report that you’ve been mislead by the billions of dollars worth of marketing money that beverage companies spent to trick you. Even though many diet drinks are sugar-free or low-to-no calorie, studies have shown that those who choose these options become quite literally heavier.

A study from the School of Medicine at The University of Texas Health Science Center San Antonio examined the relationship between drinking diet soda and long-term increases in waist circumference. Data from 474 participants in a study of older Mexican Americans and European Americans revealed the intersection of height, weight, waist circumference and diet soda consumption over a decade.

Those who regularly drank diet soda experienced 70% larger increases in waist circumference compared with those who didn’t. And participants who reported consuming two or more diet sodas per day saw increases 500% greater than those who chose a healthier option.

This matters for reasons beyond just vanity. Abdominal fat is a risk factor for diabetes, cardiovascular disease, cancer and more. And studies have shown that people with high body fat have bones nine percent weaker than those with normal body fat levels.3

Soda Increases Risk of Stroke, Cancer and Other Diseases

All that sugar does more than pack on the pounds, it increases the risk of a bevy of life-altering, or ending, diseases. Here are some evidence backed facts about the impact of soda on your health.

Once again, diet-soda does not prove a safer alternative.

Blowing Out Your Sweetness Receptors

Our experience of the world is relative. If you spend all day in dimly lit room and then you go out into the fully shining sun, it’s probably overwhelmingly bright. But if you’ve been out in the sun all day, that dimly lit room might seem too dark. Similarly our taste receptors can get used to a certain amount of input, building up a tolerance for a certain taste.

By drinking super sweet beverages, we train our tongues to register that as the baseline level of “sweet.” Then, when we eat something that contains less sugar, it might not register as sweet as all. What to a non-soda drinker might be a sweet and delicious strawberry, to a soda-drinker might taste bland and boring. What a shame!

This process is even worse with diet-soda drinkers. The sugar-substitutes that are used in those beverages are preternaturally sweet, and crafted to trigger your sweetness receptors at maximum levels. Once you get used to that, normally delicious foods can seem dull.

The negative impact this has on your diet is clear. Now, when you want a little something sweet, the only thing that will satisfy your craving is an unhealthy amount of sugar, or an artificial substitute. The imbalance in diet that this creates impacts every system in your body, including your bones.

Soda Leaches Calcium From Your Bones

Phosphoric acid in cola is the enemy of calcium, and therefore the enemy of your bones. Diets high in these substances are linked to lower bone density and hip fractures.11 This likely has to do with its acidifying nature and the tax it wages on your kidneys.

A study on men and women that included multiple types of cola found that women who drank regular cola daily had a 3.7% lower BMD (bone mineral density) at the femoral neck and 5.4% lower BMD at Ward’s area than those who consumed less than one serving per month. They found similar results for diet cola, and slightly less severe results for decaffeinated cola.12

Like phosphoric acid, caramel color is specific to dark-colored sodas such as Pepsi and Coke. The chemical 4-methylimidazole (4-MI) contributes to their deep brown color, and it has been linked to cancer in studies of mice and rats.13

California’s Proposition 65, passed in 1986, requires that companies must inform consumers if their products contain anything “known to cause cancer or reproductive toxicity.” Starting in 2012 this included 4-MI, but soda companies announced changes to the chemical cocktails that color their drinks, reducing the amount of the substance, but not removing it from the recipes.

In addition to potentially causing cancerous cells, artificial color chemicals are treated as toxins by the liver and kidneys.

Savers know how important sleep is for the process of bone formation. The caffeine in many sodas directly interrupts this process by affecting your central nervous system and altering your brain function. This drug blocks the hormones serotonin and melatonin as well as sleep reducing adenosine from being binded.

Bear in mind that while coffee does contain caffeine and it acidifies the blood pH, it is also a rich source of bone-healthy polyphenols, so it is fine to drink it in moderation.

Even if you manage to drift off, the long half-life of caffeine prevents you from getting the deep sleep that we know is so important to your health. One study demonstrated that even caffeine consumed 6 hours before going to bed had a negative impact on sleep.14

At the Save Institute, we recommend drinking distilled water with a few drops of lemon juice as your daily beverage. Smoothies are a bone-healthy drink that you can also incorporate on a daily basis. The Osteoporosis Reversal Program also notes that different varieties of teas, coffee and juices are fine in moderation. Even the occasional glass of red wine or beer has bone-positive properties. But nothing positive comes out of soda, which shouldn’t be surprising given that nothing positive goes into it.

Not enough people know how important the body’s natural filtration system is to the maintenance of a balanced, bone-healthy pH. When that system is overworked by toxins and chemicals, your bones pay the price.

An often overlooked source of toxins are GMOs. Animal studies have shown the connection between ingesting GMOs and liver and kidney damage.15 Of course, since high fructose corn syrup (HFCS) is made with corn, it is a genetically modified substance.

Soda manufacturers dramatically cut their cost by using HFCS in their products. This genetically altered corn can be sprayed with varieties and quantities of pesticides and herbicides (such as Roundup) that would kill natural corn.

If you’re reading today’s post and realizing it’s time to make some changes for the better, then I encourage you to take action! Every day you live healthier, you get healthier. Sometimes learning about the hazards of our habits can be demoralizing, but remember that every step takes you closer to your goal.

I know that those steps can be intimidating, so I created Osteocleanse™, The Seven Day Bone Building Accelerator, to help Savers achieve a clean, bone-smart lifestyle. It’s a simple, safe and scientifically-backed seven day detox to jumpstart your bone-building journey.

With 40+ recipes, shopping lists, and step by step directions, OsteoCleanse™ leads you to the path of younger, stronger bones, and the fuller life that a healthy body supports.