Don't Eat Rice Unless You've Done This First - Save Our Bones 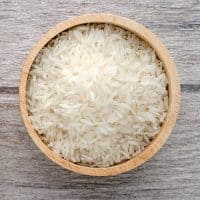 Rice is a staple of many cuisines across the globe. Most people keep a bag on hand for everything from casseroles and curries to a simple side dish.

But did you know that rice contains traces of inorganic arsenic?1 While the levels might not be high enough to make you sick, arsenic has a negative impact on the bone remodeling process and your overall health.

Today we'll learn about arsenic and rice, including which types of rice are the safest, and how to reduce the arsenic levels. You'll also get a delicious rice-based recipe to try at home.

When you hear the word arsenic, it might bring to mind an Agatha Christie novel about murder by poison. But a little detective work will reveal that arsenic turns up in the real world more often than you might think. Scientific studies have linked the element to bone loss.

Researchers in Taiwan studied the effects of arsenic-contaminated drinking water on rats and on osteoblasts in samples of rat bone cells. Osteoblasts are cells that secrete the matrix for bone formation- they literally build your bones.

The rats exposed to the contaminated water experienced a loss of bone mineral density and degradation of bone microstructure. The bone cell samples offered an explanation: the arsenic inhibited osteoblast differentiation.2

Studies with human participants who have experienced chronic arsenic exposure arrived to the same conclusion: arsenic causes bone loss, leading to osteopenia, osteoporosis, and a higher risk of fracture.3

Studies on mouse bone cells found that arsenic inhibits the differentiation of osteoblasts (the cells that build new bone), and causes bone loss. Studies with human participants concluded the same.

The Wide (And Wild) World Of Rice

There are many types of rice grown all around the world, but when discussing arsenic levels, there are usually only a few major categories considered. We'll outline those varieties, as well as a few other widely cultivated types.

The anatomy of a grain of rice will help to make sense of how these types differ. There's one part of a rice grain that is always removed: the husk. This outer layer protects the inner part that we eat.

Beneath the husk is a layer called the bran. The bran is a nutritious coating that gives many types of rice their distinctive color. The bran is why brown rice is brown, black rice is black, and so on.

The germ is a nutrient-dense kernel that often contributes to the color of a grain of rice. It is present in whole grain rice.

Finally, the innermost meat of a grain of rice is the endosperm, but you might recognize it as simply white rice. Rice is most commonly consumed in this stripped-down form. Any type of rice available as white rice also exists as whole grain, or brown, rice– although not every variety of rice is commonly sold in its whole grain form.

Now that you know a little about the structural elements of a grain of rice, here are some of the most common varieties:

Rice that has had its bran layer removed is white rice, and rice with the bran layer is whole grain rice that is usually brown, black, or another hue. Jasmine, Basmati, and American long-grain rice are some of the most common varieties, commonly available as both white and brown rice.

Unfortunately, rice typically absorbs arsenic from the environment during the growing process.

However, not all rice contains the same amount, and there are several factors that weigh into the arsenic levels of rice. Tests by the Food and Drug Administration (FDA) and independent research published by Consumer Reports and scientific journals provide information about arsenic levels.

In 2014, Consumer Reports tested 128 samples of basmati, jasmine, and sushi rice for arsenic. The researchers then combined the results with findings from their 2012 tests and the FDA’s analysis of arsenic in rice for a total of 697 samples.3

They found the biggest discrepancies were between white and brown rice, and between different geographical sources. Here is a summary of their findings:4

This data suggests that brown rice always poses a greater bone health risk, but in a study that examined the absorption rates of arsenic from brown and white rice using urinary analysis, researchers concluded that the arsenic in brown rice is less bioavailable than in white rice. (Bioavailability describes how effectively the body absorbs a substance.) Brown rice contains more total arsenic than white, so the amount of arsenic absorbed from eating white and brown rice is very nearly equal.5

The urinary analysis study is not conclusive, but it does suggest that brown versus white rice might not be as important as the geographic source when it comes to minimizing arsenic consumption.

The good news is that you can reduce the arsenic content of rice by applying a simple treatment before you cook it. Always try to buy rice with the lowest possible amount of arsenic, but no matter what type of rice you're cooking, or where its from, use these four simple steps to lower your intake of arsenic:

Don't forget that all types of rice are acidifying. While brown grain rice is a good source of bone-healthy nutrients such as fiber and manganese (and is a Foundation Food because of it), it must be balanced with alkalizing foods.

Data analysis shows that regardless of the type, rice grown in India, Pakistan, and the state of California contain the lowest levels of arsenic. Generally, brown rice contains more arsenic than white rice, but that difference might be rendered insignificant by the lower bioavailability of the arsenic in brown rice. Rinsing your rice, boiling it for five minutes, then draining and cooking with fresh water will reduce arsenic content.

A Rice Dish You Don't Want To Miss

Serve this delicious alkalizing recipe on top of rice.

Rice can provide valuable nutrients, and by choosing rice from a region that produces rice with low arsenic content, and using the arsenic reduction technique you learned today, you can ensure that you're protecting your bones while you nourish your body.

As always, there is strength in variety. Since all rice contains arsenic, you should eat a variety of other whole grains in addition to rice to reduce the amount of arsenic you consume.

Even if you never ate a grain of rice, you would still be exposed to arsenic in other foods, water, and the environment.

Minimizing your intake of toxins is essential. That is why the Save Institute developed a simple seven-day cleanse that gives your body a chance to detox from all those toxins from your system. The Osteoporosis Fresh Start Cleanse fast tracks your body's ability to heal itself and grow stronger, higher quality bones. Try it twice a year to help your body battle the chemicals and toxins that threaten your bone health.