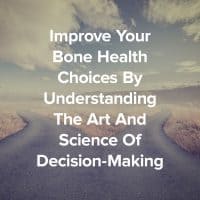 Decisions. Decisions. Each day we make thousands of decisions ranging from whether or not to hit the snooze button to how much honey to use in our tea. In fact, it is estimated that Americans make approximately 35,000 decisions in a single day. While you may be aware of the major decisions in your life, many of the everyday mundane decisions are made in your subconscious mind.

If you are reading this, there is a very good chance that you’ve already had to make some significant decisions when it comes to your health. Perhaps you’ve been diagnosed with osteoporosis or osteopenia, and that prescription medication is your only hope for reversing bone loss. While Savers know that osteoporosis drugs actually harm bones, some may consider taking the recommended medications out of fear-based decision making.

As you venture along your journey to wellness, it’s important to examine your own decision-making process. Understanding the science behind decisions, as well as how outside influences guide your decisions, is a critical aspect of good health. Once you know how decisions are made, you can stand confidently in your choices.

Decision making, by definition, is the process of preparing an option or a course of action over alternatives on the basis of given criteria or strategies.1 While this simplified explanation is accurate, decision making is so much more than weighing options and choosing the best one. When faced with a choice, many factors influence our decision-making processes, including our subconscious minds.

Some factors that influence our decisions are past experiences2, cognitive biases3, age or individual differences4, belief in personal relevance5, and fear, just to name a few.

How Past Experience Influences Our Decisions

We frequently weigh our decisions based on past experiences, although we are often unaware that we are doing so. For example, you may have grown up being told that milk is healthy and important for your bones. You received cartons of milk in school, and watched the “Got Milk” ads. Your experience with milk became ingrained in your psyche. However, mounting evidence has shown that rather than being healthy, milk is damaging to our bones.6 Despite this fact, it may be challenging to let go of your past experiences.

The same applies to the way in which your past experiences influence your food choices. In fact, some studies have shown that food preferences are established as early as in utero and continue to develop during the breastfeeding years.7 In an 8-year longitudinal study, fruit and vegetable consumption by school-aged children was predicted by either breastfeeding duration, food-related experiences during early life, or mothers’ preferences.8 Our past experiences program our brains, thus impacting future decisions.

Cognitive biases affect our decisions as well. For example, the placebo effect is a cognitive bias in which simply believing that something will have a particular effect causes it to have that effect. If you are told that you have osteoporosis, and you internalize it as a disease, then you are more likely to develop further bone loss. The mind-body connection is becoming a more widely accepted approach.

Another cognitive bias is the confirmation bias. While we all experience confirmation biases, they become particularly dangerous in medicine. For example, perhaps a physician prescribed a controversial medication to a patient, who then subsequently became well for another reason. In response to feeling good, the patient praises the doctor. The doctor then prescribes the medication more often, with few successes and many more failures. However, the physician is apt to remember the successes, as it confirms his or her belief that the medication is doing its job.

Free Will And Decision Making

Free will is the ability to act at one’s own discretion. While we would like to believe that we are completely in charge of our decisions, studies have shown that our freedom of choice may be an illusion.9 On a subconscious level, many factors influence our brains.

Decisions we make in our daily lives are influenced by advertisements. A 2009 study showed how our unconscious thoughts influence our food choices. Researchers in the study split school-aged children into two groups. One group watched ads of games and the other group viewed “junk food” ads. Both groups had access to cheese crackers during the experiment. The students who watched the advertisements of junk food consumed 45% more crackers than the students who watched non-food related ads.10

This same concept also applies to television ads for pharmaceutical drugs. The United States is one of only two countries in the world to allow Big Pharma to advertise prescription drugs directly to the consumer.

When you are unwell, you are searching for answers. Vulnerable and sick, it is easy to understand how some consumers could fall prey to pharmaceutical advertising. A recent study examined prescription drug commercials and found that 57% of the most emphasized claims in the drug adverts covered were ‘potentially misleading.’ Worse, another 10% were demonstrably false!11

The pharmaceutical industry has taken advantage of those concerned about their bone health. For example, Fosamax had annual sales of $3 billion until its U.S. patent lapsed in 2008 and generic versions of the popular osteoporosis drug flooded the market.

It’s important to recognize that advertisements and messages that we hear around us erode our free will. If we are aware of this fact, we can evaluate our decisions more objectively.

How Instincts Affect Our Choices

You’ve probably heard the adage “Go with your gut.” Perhaps you are aware of our “sixth sense.” Our instincts are an amazing collection of all of our subconscious experiences over our lifetimes, and maybe even before we were born. However, before you can follow your gut, you must be able to hear it, and that requires giving ourselves the time to quiet our bodies and minds.

When broken down to a basic level, our primal instinct is for survival. Let’s pretend that you are in your doctor’s office and you have just been told that you have osteoporosis. Your doctor lists your options, emphasizing that drugs are your best chance for stopping bone loss. Your first instinct might be to grab the prescription and run to the nearest pharmacy, after all, your health depends on it. However, when you take a moment to reflect on the interaction, you realize that your body is smart and that there are effective drug-free tools to reverse bone loss without the unhealthy side effects.

Your body is wired for survival, and intuition is one of the ways that your body protects itself.

How Fear Affects Our Decision-Making Process

Fear plays a significant role in the health choices that we make. Many of us grew up in an age where our doctors were viewed as the all-knowing medical experts. While well intentioned in most cases, physicians often use fear-based tactics to influence the treatment choices patients make. Patients often follow the advice of their doctors out of fear. They are afraid of the worst possible outcome, or they are scared of making their physician angry if they don’t follow their advice.

Unfortunately, fear and stress create biochemical reactions that have adverse consequences on bone health. The body responds to fear by releasing adrenaline, epinephrine and cortisol. As explained in the Osteoporosis Reversal Program, cortisol is harmful to bones. Additionally, excess adrenaline elevates blood pressure and suppresses immunity and digestion, all of which impact long-term bone health.

Decisions made under duress may not be sound. Fear often triggers the fight or flight response, which hinders any ability to make healthy decisions. One of the best ways to eliminate fear is to acquire knowledge. Also, self-awareness can go a long way to calm your fears.

Motivation and decision making are intricately linked. Motivation establishes the purpose of the decision-making process. While benefits motivate some people, others are driven by aversion to risk. To effectively make a decision, it’s important to evaluate your bone health philosophy and level of motivation.

For example, if you have been told that you are losing bone, how motivated are you to make the changes necessary to reverse your bone loss? Are you motivated by the possibility of feeling healthy and alive? Or, rather, are you motivated by the fear of becoming increasingly weak and ill. Both are valid motivations, and fully understanding your motivations will help you make better decisions.

Mainstream medicine is heavily weighted on herd mentality. Herd mentality refers to the tendency for people’s behaviors or beliefs to conform to those of their peers. Studies have shown that natural desire to be part of the ‘in crowd’ could damage our ability to make the right decisions.12

Examples of herd mentality abound in our society. For example, plenty of people still consume genetically modified food, despite the plethora of research indicating that it is unhealthy. Many justify the behavior with comments such as, “Everyone else is doing it, so it must be okay.”

Conventional treatment recommendations for osteoporosis typically include medications. It is rare that a health practitioner suggests diet and lifestyle modifications as a first-line treatment strategy. Even when doctors recommend diet and exercise changes, their suggestions are not always based on science.

If you decide to follow the Osteoporosis Reversal Program, friends and family may question your choice. It’s highly unlikely that people in your social circle will understand when you explain that osteoporosis is not even a disease. They may criticize your decision to go against the recommendations of conventional medicine.

However, with time and education, you will feel strong and rooted in your beliefs. The philosophy of the Osteoporosis Reversal Program is precisely the opposite of herd mentality. Through the use of scientific evidence, Savers are regaining their bone health and vitality.

Decision Making Is A Skill – And Skills Can Be Improved

Despite the fact that many factors subtly impact our choices, the decision to choose is still quite remarkable. Unfortunately, questioning the status quo, critical thinking, and evaluating evidence are not universally taught or learned in our society.

As with any skill, practice makes perfect. Now that you are aware of the factors that impact your decisions, you can practice making decisions in a more enlightened way. As part of the Save Our Bones community, you are surrounded by like-minded people who are on the same enlightened path as you.

Now What? How Do I Make A Decision?

Now that you are aware of the many influences that impact your decisions, how can you utilize this information when making them? The answer’s simplicity may surprise you:

At the Save Institute, we aim to provide verifiable scientific data so Savers can feel comfortable with their decisions, and the Osteoporosis Reversal Program contains hundreds of mainstream studies supporting the information it provides.

One of the bonuses included in the Program, Doctor Communication Tutorials, gives you effective ways to communicate with your doctor your decision to follow a natural bone health plan without ruining your relationship with him or her. Armed with this information, you’ll feel comfortable with your decision as you embark on your drug-free bone health journey.

5 Acevedo M, Krueger JI. Two Egocentric Sources of the Decision to Vote: The Voter's Illusion and the Belief in Personal Relevance. International Society of Political Psychology. 2004. 25(1). 115-134.